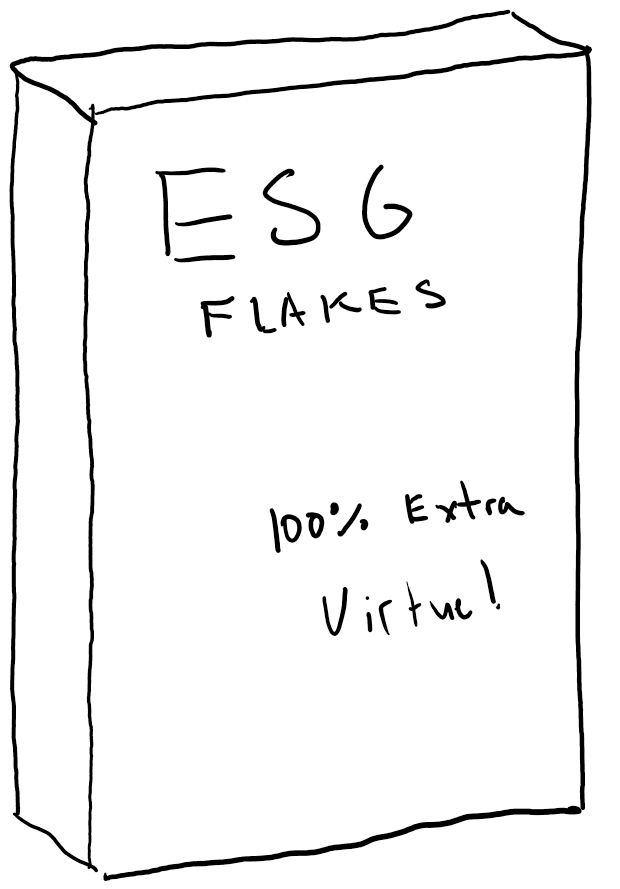 In 2014 I was halfway through my graduate program in finance and I’d developed a habit that I think many of us can identify with: obsessively watching TED Talks. TED Talks started in the 80s but gained widespread attention as they started being shared online in 2006. Almost a decade later, I’d taken to the habit of getting a notification when a new TED Talk was posted and listed to the curious, hilarious, or fascinating stories of these well-polished speakers. One that caught my ear in 2014 was a talk by Chris McKnett, who passionately presented “The Investment Logic for Sustainability.” Succinctly, the talk essentially ran through the basic thesis of ESG products (Environmental Social Governance) and then made the argument that not only did investments focusing on these factors (specifically those oriented towards sustainable development and products) make a difference in the real world, but that they had and would result in superior investment performance over time as non-sustainable companies fell out of favor. It was a fascinating idea, and such an idea has caught the attention and imagination of many portfolio managers and investors over the years. Sadly, I’m here to report that in the past eight years since I watched that TED Talk, ESG products have largely turned out to be a marketing ploy to justify high fees with a lack of real-world impact.

ESG Is Not Unimportant

Before we get to the harsh reality, let’s soften the blow: ESG does matter to people, as does its cousin SRI (Socially Responsible Investing.) Many people and organizations have good and valid reasons they choose not to invest in certain things. For example, we would all raise an eyebrow if any lung cancer charity or foundation had tobacco companies in their portfolio. It would give us some concern if a refugee charity invested in the military-industrial complex. Even at the individual level, we see plenty of investments of exclusion built into portfolios: LGBTQAIP+ investors choosing only to invest in companies with progressive values, feminists investing in companies with female leadership or equitable representation, religious investors choosing to invest in things that only align with their devout values. All of these are valid and important reasons for people to invest in certain things and not in others. The problem is in the packaging and presentation of the idea.

The brand of “doing good with your money” has a great appeal to it. The problem then becomes that the brand has to create products and those products come with packaging and that packaging can be misleading. For example, a few years ago a commentator in the financial realm pointed out that both “normal” funds from Blackrock (the largest institutional money manager in the world) and some of their ESG products were essentially the same.

See the similarities? Seven of the top ten holdings in each fund are identical and held in almost identical proportions. For a premium of 5x the cost, you can buy essentially the same investments, but with an ESG branding. Let’s also point out the immediate and obvious ESG criticisms that could be made about the ESG choices. Apple used exploitative labor in China, Microsoft by its own reporting pays women 7%-20% less than men in its employ, Amazon is accused of multiple human rights abuses of its workers in addition to union-busting, Tesla has regularly engaged in union-busting, Alphabet (Google) has been regularly criticized for accepting propagandistic requirements from China as well as the unethical use of user data, NVIDIA has been fined $5.5 million for failing to disclose the impact of crypto mining using its technology, JP Morgan has endorsed blockchain as a technology despite a single blockchain transaction consuming as much energy as the average home uses in two months, Meta Platforms (Facebook) has helped propagate political manipulation of elections, and Home Depot is the largest corporate donor to politicians who supported the January 6th riot. Now, you might read some of those issues as extremely important or unimportant, but that’s the acid test: do any of these, or some of these, or none of these, meet your personal criteria of what constitutes an investment in environmentally friendly, socially responsible, or strong governance in a company?

The Cost of ESG Products

Understanding then that the definition of ESG is fluid and personal, the attempt to satiate most ESG tastes will come at a premium. While the average cost of a passive index fund is typically below 0.10% per year, active ESG products regularly cost in the high double or triple digits of annual expenses. This is somewhat justified by the requirement that ESG products have portfolio managers performing due diligence on the investments within their portfolio, but herein they have a problem: They must serve two masters. While a thematic ESG product purist might argue that a fund accurately representing the ethical or moral interests of its theme is the most important thing to investors, the economics of funds tell a different story. Funds with high performance relative to their peers generate more interest, which generates more investment dollars, which generates more fees, which generates more bonuses to the portfolio managers. Thus, while the portfolio manager has been given a mandate by their investors to follow the ethic of their theme, they are financially compensated not for following the theme, but for driving performance results despite the theme. This is why we find so many ESG products are guilty of “greenwashing,” or advertising ESG themes and considerations in their funds while simultaneously acting as a closet index fund, charging 5x-50x the cost of the index they’re tracking while marketing themselves as following some sort of ESG methodology.

Some Light on the Horizon

There is some good news on this front, both from a regulatory standpoint as well as a technology standpoint. Regulators have been taking a harder look at the ESG product marketing claims of companies, and have even reached settlements for fines related to mis-marketing funds as meeting ESG criteria. It is expected that this scrutiny will increase with time and that we will see more fines levied against firms that are pretending to offer ESG products without actually doing so. On the technology side, direct indexing technology is becoming more available, allowing investors to buy the individual stocks within an index while excluding their areas of concern, rather than buying a wholesale portfolio. This approach is not yet as efficient as it could be, with the approach resulting in sometimes hundreds of page-long tax forms that have to be reported annually. But for those with the resources and genuine passion for certain causes, a tax-preparer premium might be worth actually investing in their beliefs. Oh, and for those who are wondering, Chris McKnett went on to work for Wells Fargo, a company famous for making over a billion dollars in overdraft fees from low-income customers, discriminating against minorities, and been fined over $3 billion dollars for defrauding its customers; all very sustainable business practices.