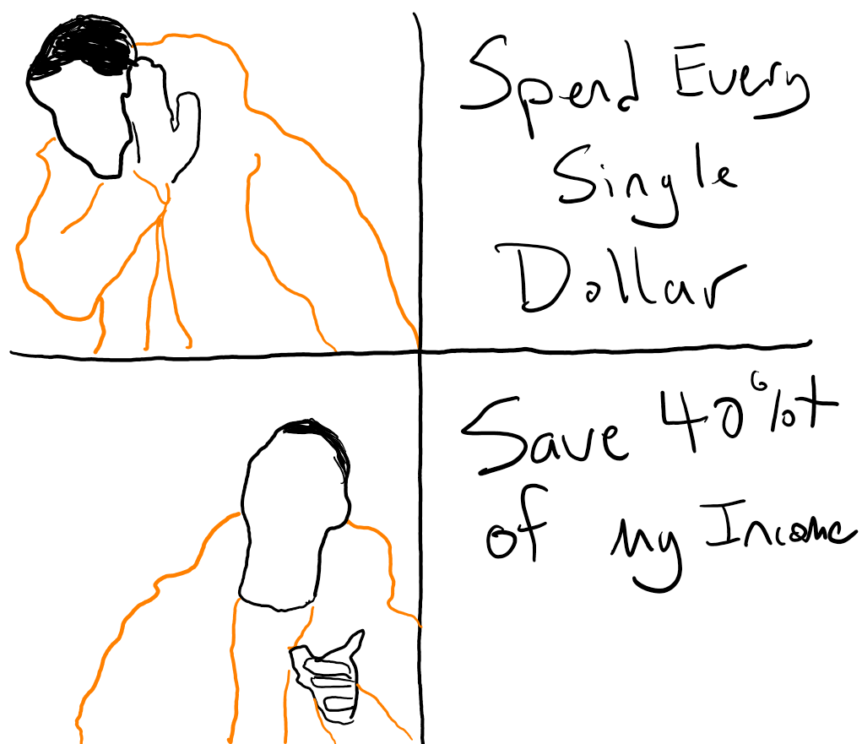 Like most obsessions, my obsession with saving didn’t start with saving or as an obsession. In fact, to go back in time a few years, you’d think I had an issue with money avoidance. Today I wanted to take some time to trot down the personal path and share how it came to be that I effectively deploy over 40% of my income towards wealth building rather than lifestyle, despite not being a FIRE fanatic or having any interest in retiring early.

The Origins of a Financial Planning Practice

Right out of high school, I joined the Army. While it is many things, a high-paying employer the military is not. Suffice to say, by the time I’d gotten out of the Army, I had not built up any real or significant savings. In my latter few years of military service, I worked at IBM on the civilian side and started working on my master’s degree part-time. By 2015, my net worth was about negative $15,000 due to student loans, and my assets were only about $5,000 in checking, $3,000 in a Roth IRA, my resume, and a 2001 Hyundai Santa Fe. It was in the middle of 2015 that I started the financial planning practice that would become MY Wealth Planners®, originally affiliated under the umbrella of Waddell & Reed Financial Advisors (an organization that no longer exists.) What Waddell & Reed primarily provided were coaching, regulatory compliance, and a technology stack. In return, they kept about 40% of the revenue my practice generated. About three months into my practice, with unstable income and a handful of clients, I had to open my first credit card, which provided a $7,000 line of credit. Two months later, that line was maxed out and while I’d kept paying my student loans the whole time, my net worth had declined to about negative $21,000, and that was before the business loan. You see, Waddell & Reed had a program to help new practices build a survivable amount of revenue. A problem in financial planning and investment advice is that most compensation is recurring and paid over time in small increments. While this is beneficial in the long term, a client who invests $100,000 with you at a 1% fee is only paying $83.33 a month to work with you, and at a 60% revenue split, you’re only getting $50 of that before taxes. To help overcome this limitation, Waddell & Reed would advance you 36 months of fees (or at least, your split) which would then be paid back over the following three years, usually in about 33 months since client assets would typically grow in value over that time. This meant the same $100,000 investment paid $1,800, which was a more livable level of income to build a business on. However, this path was inconsistent, and annually over the first four years of my practice, the boom-and-bust cycle of a new and growing business meant that I would take out another $7,000 credit card annually, and in a revolving cycle would max those cards out. At the lowest low, my net worth had declined to negative $41,000.

The Origins of an Obsession with Saving

The rollercoaster of boom and bust debt and income started to fade around the third year anniversary of the practice. This was a combination of a few factors. First, the original 36-month advances had been paid off and so recurring revenue started to come back in. Second, three years of community involvement, client relationship building, and repeated referrals had started to increase the volume of client relationships that were coming in beyond just the direct effort of being present. Third, as my experience and expertise had grown, so too had the interest from higher net worth clients with more complex financial planning needs. Because of this, by the end of the fourth year in practice, my net worth had hit break-even with all credit cards paid off (permanently) and little odds and ends like student loans essentially becoming minimal considerations in the overall scheme of things. Four months into that year, I took the practice fully independent and launched MY Wealth Planners®. This caused a few months of no income as we waited for regulatory review and approval, and after that, the following year (2020) became a year of building and rebuilding, along with the volatility and shakes that came with the pandemic. Throughout this time, I decided to internally “professionalize” my personal income. During the early years of the practice, my income was whatever I was earning at the present time, and as a result, activities such as saving or wealth building had been largely sporadic and inconsistent. Cash was mostly used to pay off debt during that time and leftover cash was squirreled away to carry me to the next revenue boom. Professionalizing meant paying myself a fixed amount and keeping the rest in the business, starting to max out retirement contributions, and building up more long-term savings; all activities I preached to clients but hadn’t been in a position to successfully accomplish for the first several years of my practice.

An Obsession with Saving

Fast forward several years to the present. Today, I pay myself $155,993 per year plus whatever profits the business generates, though that’s done later on in the year and I don’t guarantee it to myself, since profit isn’t a guarantee. This shouldn’t be a shock or surprise, since I pay myself on the same rank-and-experience paytable that I would pay any employee on, and I publish that table in my employee benefits guide. Of that amount, $20,500 annually goes to maxing out my 401(k) contributions (13.14% of my income.) Another $6,000 goes to contributing to a non-deductible IRA which I convert in monthly increments into my Roth IRA (3.84% of my income.) I also pay $5,865.96 for a variable universal life insurance policy, of which about 52% gets retained as part of the cash value (3,050.29/year or 1.95% of my income.) On top of this, every paycheck (two per month) I put $2,500 into my savings account, some of which goes to quarterly taxes, and the rest of which is saved long term. The net in 2021 was about $37,680 (24.15% of my income.) Finally, I overpay on debt. I have an auto loan that only costs $323 per month and a student loan payment of $173.13 per month that has been in interest-free status since the start of the Pandemic, though I continued to keep making payments. I have paid $1,500 monthly into the auto loan which will end in another three months, and once that’s done will wipe out the rest of the student loans in the following four months by rolling the payment on the auto loan into the student loan payment. Cumulatively, while some of this is taken up by interest, this is deploying 13.17% of my income towards short-term debt elimination. With that part done, I’ll maintain a mortgage for another several decades, as the interest rate is so low that it’s not worth making extra payments on. All in, I’m saving about 43.21% of my income or deploying it towards wealth-building purposes. A result of this strategy, along with the return on investment from investment assets, home equity, and the growth in the value of my practice, has taken me from a net worth of negative $41,000 less than five years ago to a current net worth of $956,704.

Living with an Obsession with Saving

To be sure, an obsession carries a negative connotation for a reason. Obsessions are irrational and often pathological behaviors that can lead to serious damage. I’m keenly aware that I don’t need to save as much as I do. I could make minimum payments on my car and student loans, accrue nominal interest, and enjoy the lifestyle the rest of the money affords. I could even potentially be more productive with the debt payment dollars by instead investing them in a non-qualified account. But as I grow older and my interests in life shift, it’s become important to me to build wealth and to be a role model for both those close to me and for clients. At some point, I might taper my savings behavior, but until that time comes, I’ll just keep on building. It’s important that our use of money (spending, saving, or giving away) match the values that are important to us in the long term. In that regard, I’m doing exactly what I should be.