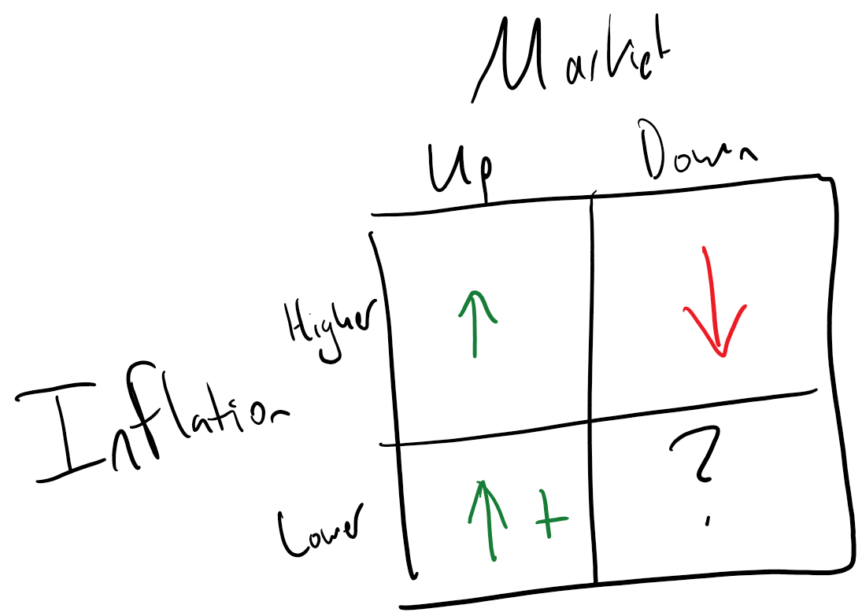 Risk in the investment world doesn’t actually translate to the common meaning of the word “risk.” When I tell you that an investment is “high risk,” your first thought is probably that it means there’s a high chance of losing money or losing the entire investment. That could be the case, but in investment professional parlance, “risk” more typically refers to the level of volatility in the investment. Simply put: “how inconsistent and wide is the range of the returns?” However, there are many other forms of risk in investing, and there are two that have become more important over the course of this year: inflation risk and reinvestment risk. Today, we’re going to take a look at the drivers of why these risks have come into greater focus this year, what threat they genuinely pose to our investments, and what we should be doing to rethink risk.

Bottom line up front: inflation is the big issue here. We’ve written about inflation recently and how it has grown up substantially this year compared to the last several decades. At a trailing 12 month average of 5.4% annually, inflation is now more than twice what it was a year ago. In this environment, we also have another danger: incredibly low-interest rates. To combat the economic downturn associated with the pandemic in 2020, the Federal Reserve lowered the target interest rate to less than 0.25%, which essentially lowered the floor for how little banks and other institutions could lend money for. This has resulted in some positives such as record-low mortgage rates, but this causes a problem for the investor: those same low-interest rates creep into fixed income securities such as bonds and mortgage-based securities, and ultimately reduce the level of return from those investments. As a result? We have inflation rates higher than the returns offered by most fixed-income investments currently available. This means that while the purchasing power of a dollar has declined by 5.4% in the past twelve months, fixed-income investments yielding high credit rates of 3%-4% aren’t keeping up. Throw on the risk of locking yourself into a low-interest rate below inflation for the next five to fifteen years, and you’re facing some serious trouble.

Therein is another issue with low-risk low-yield investments: reinvestment risk. Many financial products such as certificates of deposit (CDs), whole life policies, and annuities offer fixed or guaranteed rates of return. In some cases, these guarantees are rather attractive; in the past decade, a fixed annuity might yield 3%-4%, offering a relatively safe return above the inflation rate of 2.3% at the time. The problem that has come from this is the holding period required. While some CDs have holding periods of less than a year, insurance policies will often have five-to-fifteen year minimum holding requirements to avoid a surrender penalty that can be in the double-digit percentage points (i.e., if you cancel the policy in the first year, you might end up paying a 10% penalty on your investment redemption.) Herein is the reinvestment risk: For CDs and insurance policies being offered during a period of historically low-interest rates, the odds that rates rise in the future and before the minimum holding period is over is enormous. The federal reserve has already signaled an intention to begin raising rates in the near future, meaning that fixed contracts purchased during the downturn will soon be outperformed by future rates not so far away, while the contract holders will be stuck with low rates for years.

Rethinking Risk: What you can do about it

The fundamental questions at hand are: “Do I want to be conservative and all but guarantee I lose money to inflation?” If the answer is yes, then stay the course. If the answer is no, then the next question comes up: “Am I comfortable assuming more risk (volatility) to improve the likelihood that I preserve the value of my money or grow it?” That question is probably easy to answer if you’re years from retirement, but if you’re approaching or in retirement, accepting higher portfolio risk can be a tough pill to swallow. Ultimately the decision there is whether you want to guarantee the loss of value in the portfolio or run the risk of loss of value in the portfolio. Assuming you’d rather risk the chance of loss than guarantee the loss, then an incremental move up the risk-reward spectrum is likely called for. If you’re concerned about being near all-time highs in the market, that’s a fair concern, but all-time highs are the norm (7.5% of trading days) and not the exception in the market. It’s just a matter of being able to grin and bear it through times when it’s not.