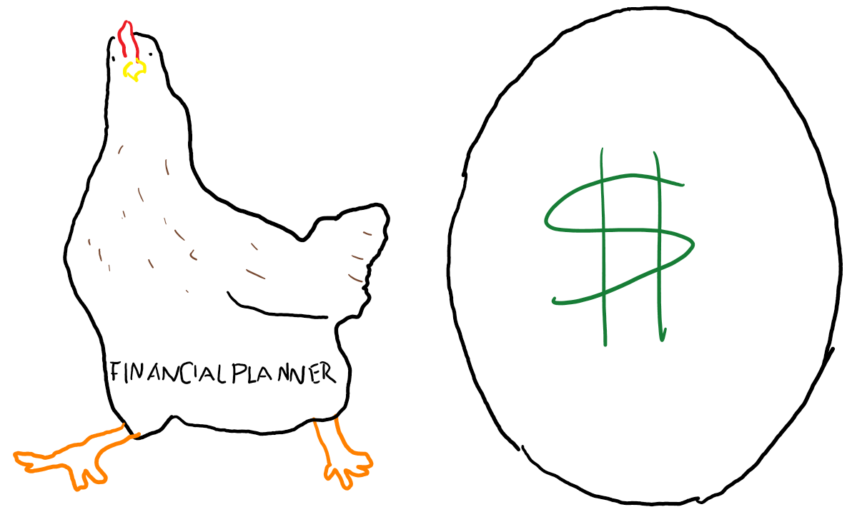 As you know, we were on hiatus for two weeks earlier this month, as I was in Manhattan, Kansas, at Kansas State University (which, for those who don’t know, is Harvard for Financial Planners). It seems only fair that with the interruption to your regularly scheduled educational content, that I should share some of the research we did while we were in Manhattan. Specifically, my research project was looking at the determinant relationships between those who use financial planners and those who don’t, as well as then what other sources of professional information people seeking advice around credit and investing use. To examine that research question, we used the Survey of Consumer Finances, a tri-annual study conducted by the Federal Reserve on several thousand households across the United States, which are representative of the general population.

The Trend that Led to our Research Question

Prior to the advent of the internet, financial advice was an almost entirely transactional business, largely staffed by the infamous “stockbrokers”, who were required to both execute purchases and sales of securities, but who also was the predominant source of advice around those transactions. This was compounded by the difficulty of achieving “asset management” pre-internet, as something as simple as rebalancing a portfolio could require dozens of pages of paperwork, client signatures, and weeks of work to mail the appropriate documentation place to place. This ultimately meant that only the ultra-affluent with “family offices”, full-time staff who managed their funds, could afford investment advice separated from the transactional business model. With the opening of the internet, more and more self-directed investment platforms opened the door for the public to circumvent these gatekeepers, and ultimately the business model for financial advice shifted to a service-based model, with a growing population of “asset under management” service providers managing both investments and giving general financial advice. However, this model still largely serves a population with a million-plus in liquid investable assets, and so over the last decade, there has been a growing proliferation of service models including hourly, subscriptions, project-based, and retainers, which all purport to help serve a population with less liquid assets, including younger people or those with higher incomes who hadn’t accumulated significant wealth yet.

What We Were Expecting to Find

Going into any scientific research project, you develop hypotheses that inform the assumptions you’re making about what you expect from the data. In the case of my project we used age, race, and sex as immutable characteristic demographic controls, and then looked at educational attainment, self-reported financial knowledge, financial stress, and financial characteristics such as financial and non-financial assets, income, homeownership, and debt, to analyze financial behaviors. To analyze the research question, we were working through the lens of “Financial Help-Seeking Theory”, which posits that age, financial behaviors, and homeownership will increase the likelihood of help-seeking while financial stress decreases the likelihood of help-seeking. Because we wanted to examine whether the growing proliferation of alternate service models was changing the math on whether younger and less affluent people were entering into financial advice arrangements, we thought we’d see that both the traditional metrics of financial advisor use (age and liquid assets) would be statistically significant, but that we’d likely see that age was becoming more of a net neutral and that other factors such as non-financial assets (e.g., real estate, business ownership, etc.) and income would be becoming more statistically significant over time.

How we performed the study

This is usually the part where a lot of people start skimming academic papers, and for good reason: There’s not much to be learned in how a study was conducted when you’re ultimately just looking for the summary of things. So we’ll keep things really simple here: We developed a statistical model that had two output results: Whether someone in the sample group used a financial planner and what factors were consistently found in those who did, and from that, how many other sources of professional advice (lawyers, accountants, etc.) they were using for the same types of credit and investing questions. If you want more information than that and want to read nerdy terminology like “Binary Probit Model Analysis” and “Ordered Logistic Model”, you’ll probably have to wait for the study to be published in a year or two!

What did we find?

What about other professionals?

The Relationships Between Planning & Wealth

The question should arise: What can we do with this information about the relationships between planning & wealth? To be frank, not much. It took two weeks for us to build the models we used during our study to get to this point in our findings. Expanded research into this research question might go a couple of different directions: we could look at previous iterations of the Survey of Consumer Finances to examine the trend and whether our findings are growing in significance or represent a change over time. We could also deepen the model analysis to get at the causal relationship between the variables (again, the chicken and egg problem is prevalent here). For now, what we do know is that the odds are significantly greater that people with high education, high financial knowledge, and both high incomes and financial assets are more likely to use financial planners than those without. The question remains to be seen whether one causes the other, but that’s the fun of research!