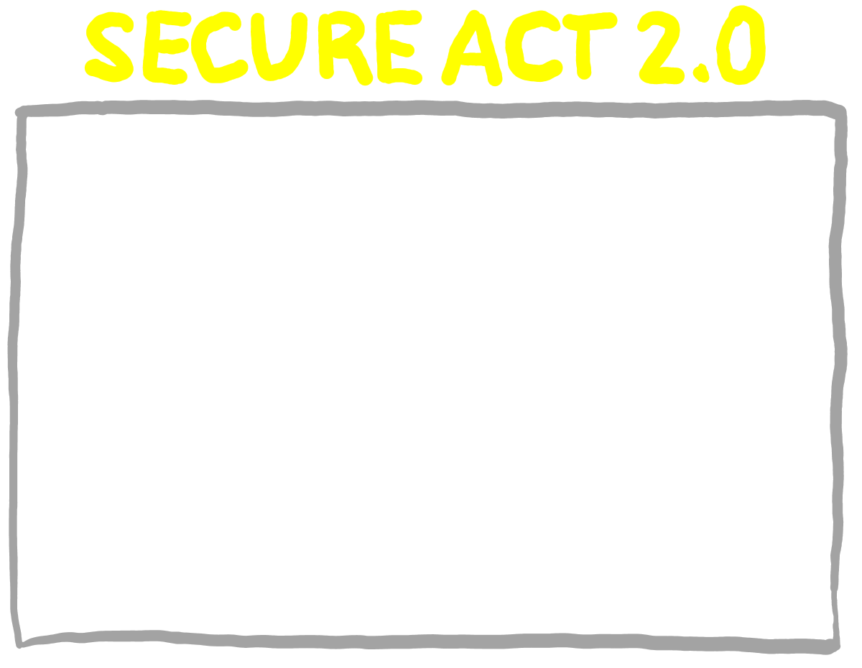 Welcome to 2023! The holiday omnibus bill brought out a significant number of changes to retirement accounts and other investment vehicles. Today we’re getting you caught up on just a handful of the many updates included in the “Secure Act 2.0.” We’ll start with the generics that apply to everyone, and some business-owner specifics are at the end.

A major change for 401(k) and other retirement plans is the expansion of Roth contributions into the employer matching space. Traditionally, whether employees contributed pre-tax, after-tax, or Roth in their 401(k) plans, employer matching dollars were always done on a pre-tax basis. In order to generate more immediate tax revenue, Secure Act 2.0 includes the option for employees to now opt into having employer’s matching dollars contributed into the 401(k) plan as Roth contributions rather than as pre-tax dollars. For those in lower income tax brackets, this is a huge saving opportunity, although the double-bite of the Roth contribution and the matching dollars may take a chunk out of people’s paychecks if they’re not careful.

For those over the age of 50, the catch-up provisions of retirement plans have added anywhere from $1,000-$6,500 in extra retirement-savable dollars. However, this now comes with a catch. Those over the age of 50 with W2 wages greater than $145,000 can only make catch-up contributions into their Roth account. This means for someone with high enough income, they can contribute up to $22,500 into their 401(k) on a pre-tax basis, but to take advantage of the extra $7,500 of catch up contributions in 2023, they would have to make the last $7,500 in Roth contributions. And if the employer doesn’t offer a Roth option? Then catch-up contributions aren’t permitted at all. As the expression goes: “Don’t like it? Write your congressman.” But a more practical step might be bugging your employer to offer the Roth option in the retirement plan, as this adoption usually doesn’t cost the employer anything extra to offer.

A common question I get as a financial planner is “What if my kids don’t go to college? What happens to the 529 plan?” Well, the Secure Act 2.0 has come out with a solution to that problem. 529 plan funds can now be rolled into a Roth IRA for the benefit of the child. However, it comes with some significant catches and requirements: The plan must have existed for at least 15 years, contributions from the past 5 years are ineligible for conversion, conversions are capped at the Roth IRA contribution limit for the year and count as a Roth contribution for annual limit purposes, and the maximum lifetime conversion is $35k. All in all, it’s not a bad tool to use for leftover 529 funds and to help kids get a start on funding their retirement, but a “mega backdoor Roth funding strategy” it is not. It really just gives an out to parents with leftover 529 funds after their kids go to college (or never go to college.)

A common problem encountered by many is a financial emergency. Many will look to their retirement plan as a possible funding source, but income taxes and the 10% penalty can often make it an extremely expensive emergency tool. With this in mind, there’s now an option to take an “emergency withdrawal” from retirement accounts that are exempt from taxes and penalties. However, this emergency withdrawal is limited to $1,000 and one distribution a year. Further, any previous distributions must have been repaid, contributions have to have been made equal to or greater than the last distribution since the last distribution, and you can’t make a new distribution within 3 years of the last distribution. In short, while it becomes a potential funding mechanism for financial emergencies, the Secure Act 2.0’s writers are very clear in their intention that your retirement plan be a retirement savings accumulation vehicle, not a piggybank.

In tandem with changes to company retirement plans, employees with less than $135k in annual compensation can now fund a “emergency savings account” linked to their company retirement plan. This account is not eligible for any tax advantages and is capped at $2,500 in total contributions (not counting investment returns), but importantly qualifies as contributions that are eligible for company retirement plan matching. This is a valuable tool for new younger workers, who may struggle to build up the initial emergency fund and fund their retirement plan early in their careers, and have traditionally often had to make a tradeoff decision regarding getting employer matching dollars at the start of their career, which end up being some of the most valuable savings due to compounding over the longest period of time.

Starting in 2024, employers can count employee payments toward student loans as retirement plan contributions eligible for matching. Much like the emergency savings account, the idea here is to not penalize younger workers for struggling to balance retirement saving with other early-life expenses such as an emergency fund and in this specific case, paying for student loans.

Law Enforcement Retirees immediately can exclude up to $3k of their government paid (i.e. pension income) from income if it is used to pay for health insurance. This is an odd provision, as the bill doesn’t clearly explain whether it must be health insurance, or if medicare plans are eligible for the coverage.

Traditionally, businesses have had to establish 401(k) plans (or cousin plans like the 403(b)) to enable significant Roth savings for their employees. Those not participating in a company plan offering Roth contributions were limited to the Roth IRA’s meager limits. However, smaller start-up style retirement plans such as the SIMPLE IRA and SEP IRA can now have Roth contributions. While these are technically available as of January 1st, it’s noteworthy that most custodians won’t be offering them immediately, and some may never offer them. Many custodians have backed away from offering Roth Solo 401(k) plans out of concerns regarding liability and the filings required from the department of labor. While the SEP and SIMPLE do not fall under ERISA and do not have such similar filing requirements, many custodians may avoid the small plans. As always, a robust custodial platform for SEP and SIMPLE IRAs remains a blue ocean fintech opportunity.

Traditionally, the only retroactive retirement plan available to employers was the SEP IRA, which could be funded as late as the extension deadline in the year following a tax year. Solo 401(k) plans are now eligible for similar treatment, though it’s notably restricted to the normal 4/15 filing deadline rather than the extended 10/15 deadline.

Adding to the list of retirement plans is now the “Starter 401(k).” This plan allows employers to offer a retirement plan with no matching, only employee deferrals, and auto-enrollment. Notably, this will help small employers facilitate some retirement savings for their employees through payroll, whereas traditionally those employees who wanted to make pre-tax IRA contributions outside of work would only get their tax savings after they filed their returns. This also coordinates nicely with the required retirement plans many states (including Colorado!) are now starting to require employers to offer.