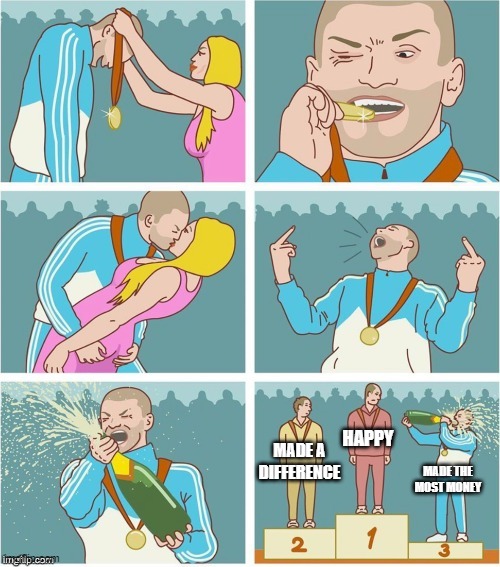 Recently, a well-known financial advisor took to Linkedin to share a bold opinion:

“Advisors who make more money than you are some combination of smarter and/or harder working. End of story.”

On its face, one can see the argument for it. Surely if you’re a financial professional whose job is to help their clients optimize their finances, surely you should be doing better than those around you with your own finances. The argument is even somewhat supported by disclosure obligations of licensed brokers and investment adviser representatives to publicly state their discharged debts, bankruptcies, and any other material “financial flaws” that might call into question their competency as financial professionals. Yet, once we look past the immediate argument, it’s quite clear that the statement fails even the most basic tests of realism and logic. Think about any given billionaire. To my limited knowledge, none of them handle their vast fortunes without the assistance of a family office (a group of financial specialists who handle the ultra-wealthy’s money on their behalf.) Clearly, family office employees are not as wealthy as their clients, yet these “smarter and/or harder working” billionaires rely on these “less smart and/or less hard-working” financial professionals. The logic breaks down even in everyday encounters. Suppose a million-dollar-income financial advisor talks to a surgeon about their need for a triple bypass. Should they “mansplain” the procedure to their surgeon since they probably make more than them? Doubtful and borderline suicidal if they do.

The simple fact is that the bold opinion in the quote is simply that: an opinion, and one of a person who frankly comes across as deeply insecure and with a narcissism complex built up around their high income. It fails to take into account the vast majority of reasons income can vary (education, background, nepotism, geography, natural talents, family network, and so on;) and fails to account for the fact that having a high income is not every person’s metric of success in life. So today, we’re talking about “return on life” rather than “return on investment” where income and money are concerned and why income is perhaps the poorest metric of intelligence and hard work.

Apples to Apples – Income vs. Success

It’s July 7th, 2019, and it’s 90 degrees in Lyon, France. Rose Lavelle, a 24-year-old from Cincinnati, OH, has shot a 69-foot goal, the second of two game-winning goals in the FIFA 2019 Women’s World Cup against the Netherlands. The US Women’s Soccer team had just clinched their fourth World Cup championship in a row, demonstrably the best in the world in their sport. Yet, later that year, the women’s team would file suit claiming pay discrimination, as it was calculated that the players could earn no more than $4,950 per game in a season, while their male counterparts, losers in every statistical sense with their best world cup placement ever being 3rd place, could be paid $13,166 per game. The difference? A potential $99,000 a year for the female world champions vs. $263,320 a year for the male losers (no offense, gents.) While in the suit, it has come up that much of the differential comes down to differences in benefits and security (a level of guaranteed pay and benefits for the women versus an entirely mercenary “eat what you win” scheme for the men) that shouldn’t be confused with the original point. The women’s team is objectively better at the game and harder working; are they less intelligent than the men’s team for asking for a level of security in their compensation versus the pay-for-wins scheme the men have taken? You could argue it, given their track record, but that’s a hindsight bias and a half. Approaching their livelihoods cautiously and ensuring a level of security for themselves doesn’t make the men smarter or the women less hard working; they had a different risk tolerance for remuneration, and only with the power of hindsight does that decision come into question.

Apples to Gardens – Income vs. Impact

The average cancer researcher holds a Ph.D., often in conjunction with a medical doctorate after completing a oncology residency. The field is extremely competitive, with only 10,000 new positions available annually for medical scientists. What is the average income of a cancer researcher in the United States? $73,896, with an entry-level wage of $46,000. Yet, it is doubtful that anyone would claim that I, Daniel Yerger, even with my alphabet soup of MBA, CFP®, ChFC®, AIF®, CDFA®, and hopefully soon-to-be Ph.D. (give me another year or so and wish me luck on comps) am smarter than these researchers, or even harder working than these researchers, even given that I make more than twice what they do on average. At the same time, I could point to risk capacity as an element of the difference (salaried W2 researcher jobs versus starting a business), which entirely misses the point. While there is perhaps a lottery winning and Nobel prize money for the researcher who one day cracks the code on curing cancer, the thousands of people who’ve committed their lives to cancer research aren’t stupid, and they aren’t lazy. They simply have a mission to make the world a better place, to save lives, and to make a difference rather than to make money. Given this light, is making more money than someone who is making more of a difference really a fair comparison to say that the money maker is smarter and harder working? Of course not.

It, of course, then goes that money isn’t everything. As the adage goes, “you can’t take it with you.” When surveyed in hospice, the five most common regrets of the dying are:

Read those again. Think about them. Not one word about wealth, income, or even the most altruistic expression of each, philanthropy. “I wish I’d been true to myself,” “I wish I hadn’t worked so hard,” “I wish I had let myself be happier.” Regrets not of dying without a pile of gold to sleep on, but of a lack of personal truth, of connection to others, of feeling like too much time had been traded for too much (or too little) money. Whether making a lot of money makes one happier or not seems irrelevant in the eyes of those who have no more use for it; rather, their attention turns to the time they didn’t spend on and with the people who mattered to them. To be measured as smarter or harder working based on the money someone makes is entirely irrelevant in the light that being smarter or harder working is far less important than being happy in the limited time we all have to do the things we want to do and to spend time with those we care about. What is wealth if we can’t use it not only to better our own lives but the lives of others?

The Apple on Its Own

In closing, I felt fired up starting this piece, and I felt oddly relaxed as I finished it. I’ll leave you with the lyrical thoughts of Tim McIlrath that are on my mind as I finish this piece.

“We live on front porches and swing life away,

We get by just fine here on minimum wage.”