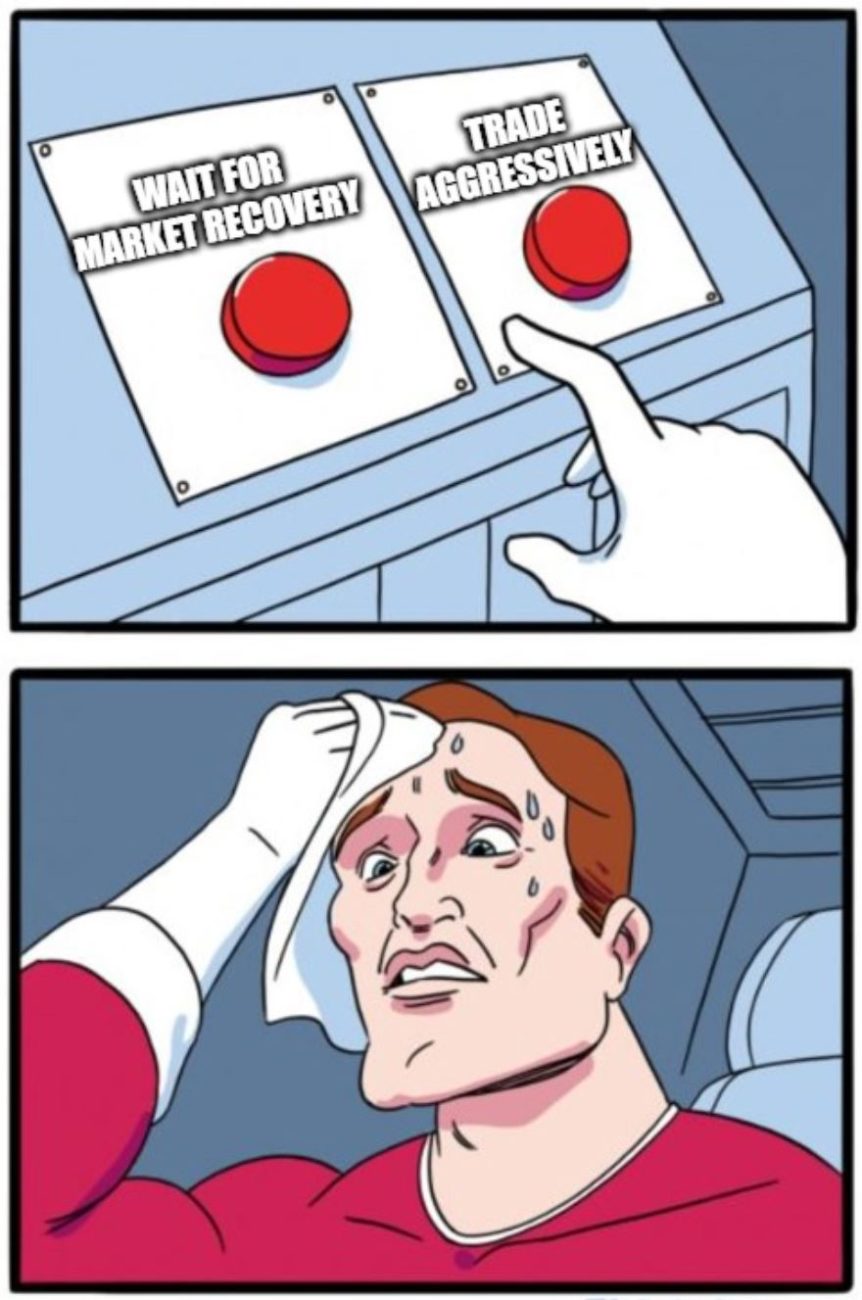 We’re almost nine full months into what we could all easily describe as a disappointing investment year. While the fourth quarter could show signs of recovery and positive momentum, it seems fairly clear that this year the market’s esprit de corps lives and dies by the Federal Reserve’s perspective on interest rates and inflation. The Federal Reserve has been plain and clear since the start of the year that it would raise rates until it got inflation under control, an almost literal “the lashings will continue until morale improves.” Yet, raising interest rates is an imperfect tool and one that has led the investing public to speculate heavily on every Federal Reserve rate raise. Unsurprisingly then, the markets have disappointed themselves over and over this year as the Federal Reserve has gone on to do exactly what it said in no uncertain terms what it would do: Raise interest rates until inflation gets under control. Yet, all of this has led to a consistent outcry as markets have meandered their way downward throughout the year: “We must do something!” Today we’re going to explain both what has been done and why “inactivity” is of much greater value than “activity.”

The Cost of Activity

Most clients and investors would assume that activity means trading. Jumping in and out of the markets, deftly avoiding the slings and arrows of volatility, defying the gravity of market momentum through sheer will and defiance. Yet, this is an erroneous belief. In fact, the math on attempting to dodge the market’s momentum has been in for well over twenty years: It doesn’t work. In 1999, Terrance O’Dean published a scathing indictment of day trading in his seminal work, “Do Investors Trade Too Much?” Using the real data of Charles Schwab’s discount brokerage trading activity over the past several years, O’Dean proved empirically that self-directed investors tended to underperform their legacy portfolios by an average of two percent in any given year. Why? Because a clear trend he found in the data is that investors would “chase hot stocks,” shifting from their “current loser” to a “winner” with surprising regularity, only to see that they’d jumped ship too early and tried to hop on a bandwagon too late.

Set aside even the empirical observation that human beings love to chase performance (who was entertaining buying some Crypto the past few years? Who did? Who is bragging about it today?) Assuming even that every trade you make has break-even performance, you’ll still slowly fall behind by overtrading your account. Every sale comes at a minor market discount due to the presence of market makers and their bid and ask spreads. These institutions exist to provide investors with liquidity, providing a service of guaranteed purchase or sale of your chosen stock or ETF, provided you pay a marginal markup or sell at a marginal markdown from the current market price, often one cent or even less. This cost is nominal, but added on is the SEC exchange fee, which currently charges $22 per $1 million in transactions, effectively an asset-based fee of 0.0022% on every transaction in the market, both on the buying and selling side. So even with the release of “no commission trading” back in 2019 from many major brokerages, there are still costs to trading, and trading simply for the sake of moving money comes at a price.

Not All Work Happens on the Field

A meme makes its way around the internet from time to time, with a picture of Usain bolt looking ecstatic after winning a race. 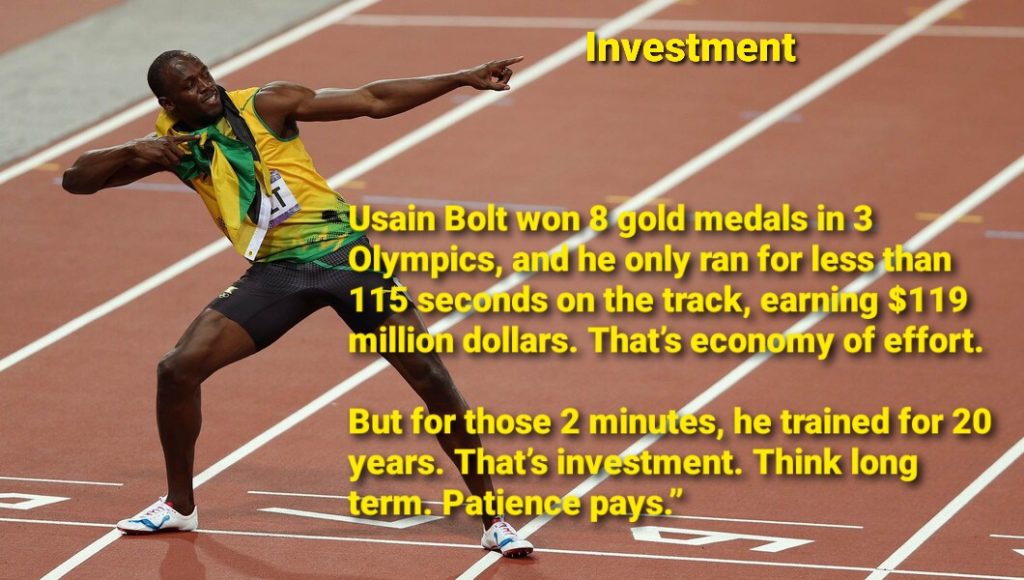 For those with auto-readers or on small phone screens, the caption reads: “Usain Bolt won 8 gold medals in 3 Olympics, and he only ran for less than 115 seconds on the track, earning $119 million dollars. That’s economy of effort. But for those 2 minutes, he trained for 20 years. That’s investment. Think long term. Patience pays.” Now, we don’t share this meme to suggest you should wait 20 years for a return on your investment. Rather, that the extraordinary results Usain achieved in the Olympics have been the result of tireless effort on the practice track rather than in front of crowds. The same can be said of your investments. To date, we’ve spent over 1,094 hours evaluating the investments in our client’s portfolios and the alternatives in the marketplace. Yet, we have only made one major investment change this year. On January 13th, we shifted all holdings of Vanguard Intermediate-Term Bond Index ETF (BIV), iShares 20 Plus Treasury Bond ETF (TLT), Vanguard Long-Term Corporate Bond ETF (VCLT), Vanguard Intermediate-Term Treasury Index ETF (VGIT), SPDR Nuveen Bloomberg High Yield Municipal Bond ETF (HYMB), and iShares National Muni Bond ETF (MUB) into equal proportions of iShares Ultra Short-Term Bond ETF (ICSH) and Vanguard Short-Term Treasury ETF (VGSH).

$MUB is missing since the chart only allows 5 comparisons; it was not the highest or lowest.

The difference of that single but significant and thoroughly researched change has saved clients anywhere from 6.99% to 26.75% on their dollars invested in fixed income holdings this year. Yet unfortunately, a ghost portfolio is not reported next to each headline we read about the condition of the market or even on our own portfolio performance reports, showing the pleasant contrast between what we have now and what would have been. The change in the portfolios was predicated on a single predicted event: The clear statement by the Federal Reserve that they would raise interest rates. We then poured nearly a hundred hours into the analysis of that statement, the investments in our portfolio, and the alternatives available to us. From that, we made that single important change. In the hundreds of hours we’ve spent watching the markets since that decision, we’ve not made another decision to make a change in the portfolios we manage. Not because we can tell the future (we can’t), but because we’re yet to see a significant cause of action to make such a dramatic change. In the meantime, we’ve been quietly doing more important work.

An unsung hero during a market downturn is rebalancing. It goes unsung because as the market continues to decline, it does little to show its immediate value. Our eyes are naturally drawn to the report at the month’s end showing how much money we gained or lost in the measured term. Yet we often neglect to review how many shares of investments we may have bought in that month. For scale, at the start of this year, our clients held 582,306.885 shares of assorted securities. Today, our clients hold 629,198.46, an increase of 53,108.395 shares of securities. Now to be clear, that does not mean that we “have more money;” any person reading their statements for the past nine months is fully aware that the market is down and their account values are down. However, this means that through rebalancing and taking advantage of the downturn, we’ve expanded the number of holdings our clients have. To use an analogy, we had 582 rental properties worth more in total at the start of the year, and now we own 629 rental properties worth less in total now; but as time goes on and we collect rents and as we presume the market will recover in due time, we have increased the rate at which we receive interest and dividend payments significantly, and have increased the exponential value of the recovery from the market declines. All of this analysis and big numbers sharing to say…

It would be nice if we could guarantee that by trading accounts and swapping investments, we’d immediately see a positive return on that activity. If that were the case, we’d all be trading non-stop, trying to trade as quickly as possible. But the simple fact is that markets rise and they fall. We’ve enjoyed effectively a 13-year streak of positive market activity; there have been bear markets and corrections along the way, but they’ve all bounced back well, and we’ve seen hundreds of percent increases in the value of assets since the great recession. The drawdown in the markets we’ve seen this year effectively has “wasted” this year and put is back to about where we were at the start of 2021; remembering that 2020 before it saw an almost 50% increase from the depths of a 33% bear market, which we’re more than 10% above at the current moment this year. A long and protracted decline can tempt us to forget how far the markets have come, but we must remember that activity doesn’t equal results. We should be careful as we ride out the last quarter of this year not to be tempted into activity for activity’s sake, but to be deliberate and conscientious in our approach to the markets. We’ll close on the Oracle of Omaha’s favorite expression, that most successful investor of all time: “Markets are a mechanism for moving money from the impatient to the patient.” So let us be patient.