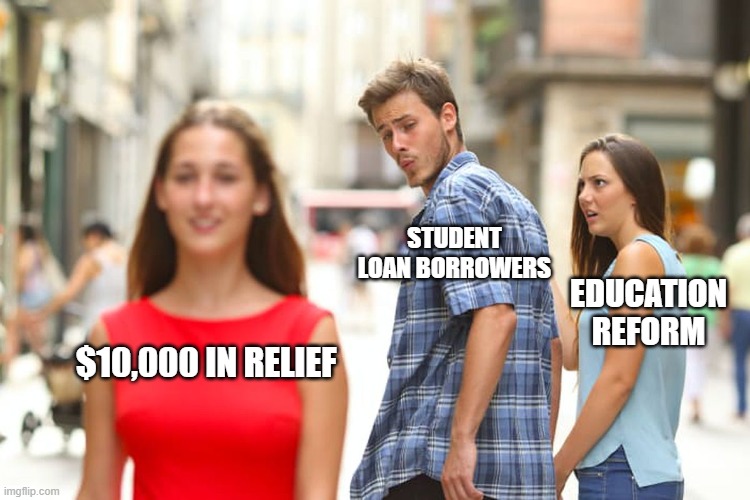 Well, it’s official. As of last Wednesday, the Biden administration has come out with an executive order to slash student loan debt. While it remains to be seen whether the order will make it through implementation or whether lawsuits threatened by the GOP and others will somehow stop this, at present, the proposal has some clear points to it and some less clear points to it. The politics of all of this aside, we’re here to summarize the order and how it can impact you.

The core forgiveness is structured as follows: Those single filers earning $125,000 or less and those married filing jointly filers earning $250,000 or less are entitled to $10,000 or student loan forgiveness ($20,000 for a couple.) Notably, this forgiveness is limited to the household level. So, for some households, filing jointly or filing separately may be a major component of the forgiveness program, as joint filings may incidentally deprive a married couple of additional forgiveness. A key issue herein is also that “income” is not defined in the executive order. This means that we are still waiting to see whether they will define it as taxable income, adjusted gross income, or modified gross income, or for that matter, upon which tax years the policy will be based. Will it be forgiven next year after 2022 taxes are filed? Retroacted to 2021? This all remains to be seen, although some of the guidance indicates that forgiveness will occur before the end of this year, leading us to expect it will be based on your 2021 tax return. It is also noteworthy that the forgiveness will not be federally taxable but may still be taxable in state income taxes, which is a much gentler 4.55% in Colorado than the 12%-37% federal brackets. This means that anyone receiving $10,000 of forgiveness in Colorado may owe the state $455 on their tax return or have that amount deducted from a return they’d otherwise receive; this could be problematic for those who were going to owe Colorado state taxes already and who are presently cash strapped. Still, last time I checked, $10,000 is greater than $455. This differs from the existing forgiveness programs, in which only public service loan forgiveness was tax-free, while other varieties were taxable income. However, it is noteworthy that this is also based on a cliff qualification. This means that unlike programs such as Roth IRAs with a tapering effect at certain income levels, forgiveness will either apply or not. This inevitably will lead to some issues with those who ended up “a dollar over,” essentially being denied $10,000-$20,000 in government relief. Finally, this program only applies to federal loans. For private borrowers or those who have taken out consolidation loans, they are unfortunately out of luck, though there has been some indication that they may pursue a second policy round to obtain forgiveness for borrowers through the Federal Family Education Loan program, which privately held loans that are backed by the Federal Government.

A group that is surprisingly included in the proposal are parents. Parents who signed PLUS loans are also eligible for the program, which could provide an additional $10,000 of student loan relief. However, and critically, this is household-level loan forgiveness. This means the program favors those families with one child or only one child with a PLUS loan; for those families that took out PLUS loans for each child, they will only receive a singular $10,000 of forgiveness, not $10,000 per child. The parent’s income applies for student loan borrowers claimed as dependents by their parents. So if a son or daughter has been living at home after college and they’re still claimed as a dependent, we might be out of luck trying to use their entry-level job income in comparison to mom and dad’s more developed income.

In addition to the proposal come a few additional terms and conditions. For undergraduate loans left over, income-based repayment will be capped at 5% of income, down from 10%. It is unclear how this will collaborate with graduate loans and whether income-based repayment for graduate loans will be 10% or if some sort of weighted average applies. Additionally, forgiveness is now expected to decline to a period of 10 years from 20 years. While ideal at face value, the forgiveness for time-based repayments is still taxable income. This could result in a tax bomb for those whose repayments are suddenly past the limit and who see forgiveness suddenly treated as taxable income. Finally, a strangely worded provision in the Whitehouse guidance is that unpaid interest will not accrue additional interest so long as payments have been made, even if the payments are 0%. This is an odd area that will certainly require more guidance, as whether this then applies to interest on the principal is considered or whether the $0 payments will apply even if payments remain unpaid.

Getting a Refund in the Short Term

One feature of the lending program is the ability to request back all student loan payments made since March of 2020, when student loan relief began in response to the pandemic. This means that for those who are within $10,000 (or $20,000 for Pell grant recipients) of being student-debt-free, it may make sense to request a refund from the lender, have the full amount forgiven, and keep the difference in payments for the past two years. There’s even an argument that if you’re above the forgiveness amount or income limits that you should do this, put the cash in savings, pocket the interest, and then pay the amount back in by December 31st to get your balance back down to where it was before the refund, and to continue payments upon the restart of student loan interest in January.

While the initial announcement indicated that many borrowers would have their loans forgiven automatically, it has been made clearer over the past few days that many people will need to apply. Students who are on income-based repayment plans may automatically trigger their eligibility for forgiveness based on their attestations for income-based plans in the past. Those using other repayment plans will have to submit an application, though the applications are not expected to be available until October, given that there was no pre-planning rollout of website support for the applications before the announcements. It’s being stated that forgiveness will be applied within 4-6 weeks of application, though given the chokepoints we’ve seen in submitting tax returns over the past few years, it’s quite likely that it will, in fact, take much longer for forgiveness to apply. Still, based on the 6-week guidance, borrowers are urged to apply before November 15th in order to “ensure” they will have their loans forgiven by the end of the year to avoid any interest accruals.

For the Record, How I Personally Feel About It

I make too much for student loan forgiveness. I also served in the Army in part for the education perks. I also have paid for grad school and my doctorate out of pocket. I also do not care one bit that forgiveness won’t benefit me. Some people really needed it, and that’s enough.