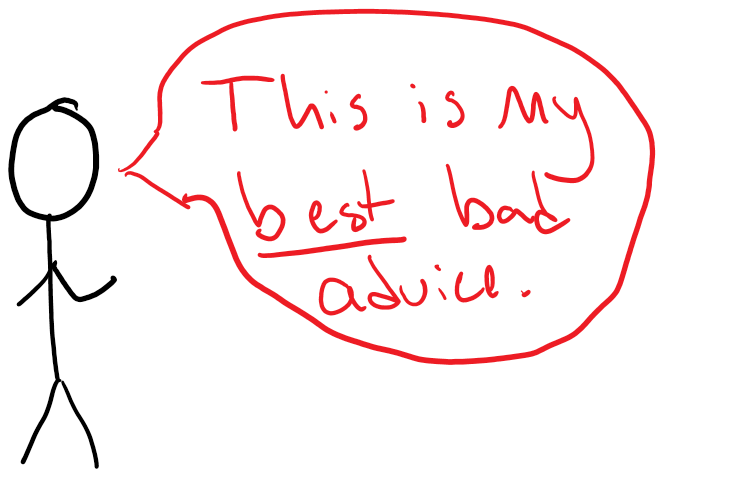 When I was in the Army, I attended a leadership course that included a land navigation assessment. Land navigation is the old-fashioned practice of using an accurate topographical map, plotting points on the map using coordinates, and physically traveling to those points. These courses would typically take 3-5 hours and be spread over a ten to twenty square-kilometer area, where you would have to find a minimum number of points during a day navigation assessment and a secondary number during a night navigation assessment. After the first day of land navigation assessments, one of the soldiers in my training squad had failed to find a single point during both the day and night phase, and was assigned to take a second attempt the following day. In order to help prepare her, the entire squad was ordered to watch her go through a practice attempt of plotting points and describing how she would navigate to the various areas. We watched her meticulously plot the exact locations and triple-checked their position. We watched her diagram out the path she would take to cut down on travel time between the points, talked through her pace count, and re-measured her pace count to ensure she was traveling accurate distances and covered every single step of the process. By all observations, she was completely locked in on how to approach the problem, and the idea that she hadn’t found a single point during either assessment baffled us. We reported this to the school cadre and we were told to walk her through it again one more time, just to be sure.

As we began to wrap up the second review (which she was passing with flying colors,) we came up with one more “practice” item for her. We told her to hold up her map, take out her compass, and orient to her first point. She got out her map and compass, measured the direction of north and oriented to it. She then looked at the angle she was supposed to turn to on her map, used the compass to turn toward that direction, and then frowned at her map, looking consternated. “What’s wrong?” One of us asked. “Well, this is where I think I’m getting stuck.” She said, looking at her compass and the map again. “How so?” We asked, confused since there didn’t seem to be anything wrong. “Well now I’m facing north, so how do I orient the map?” She asked. We were baffled. She had been facing north moments ago, and with her compass had re-oriented herself towards the first point which was off to the west (say 50 degrees or so.) She wasn’t facing north, she was facing her point, so what was all this business with the map? Then it clicked. In the army, a technique they teach is to rotate the map as you change directions so that as you look at the terrain on the map, what’s in front of you in real life is “in front of you” on the map. Somehow in her mind, she’d learned that technique and gotten it confused that whatever direction the map was pointing north in her hand, was also north in real life. Thus, by turning her body (and thus the map) to 50 degrees, she now thought that she was facing north (0 degrees) and the map agreed with her because she hadn’t rotated it to stay aligned with the actual direction of north.

Now, you’re probably sitting there thinking: “This person was a complete idiot. Who thinks turning their body and a map around changes the direction of north?” Well, that’s a fair question, but there’s a more key thing to consider here. This was a soldier with several years of experience, who had presumably done land navigation several if not dozens of times before, who had almost certainly sat in several if not dozens of classes on land navigation. Yet, at some point the idea to turn the map to orient the direction she was going had been transformed into a single misconception (however illogical,) and was causing her to completely travel off course. The same issue has befallen many people when it comes to the practice of orientation. Avalanche victims have been found to have dug themselves deeper into snow instead of digging up and out of the snow they were in. Divers can lose their sense of direction underwater and particularly when exploring caves or shipwrecks and can become disoriented regarding their direction of travel. Even seemingly simple puzzles and questions can present complex paradoxical answers before coming to conclusions. So today we’re talking about seemingly obvious paradoxes and snuck assumptions that come from well-intended advice but can undermine your ability to build wealth over time, and how you can avoid falling into them.

Social Security eligibility starts at age 62 and tops out at age 70. Depending on the year you were born, full retirement age hits between age 65 and age 67, with benefits increasing slowly month by month between age 62 and age 70, with a “mid-point” at that full retirement age between 65 and 67. Claiming social security early, or before full retirement age, causes you to receive less retirement income than you would have if you waited until full retirement age and comes with some complicated calculations that can reduce your benefit further if you’re still working. Conversely, waiting until 70 is supposed to increase your social security income. It is often presented as a no-brainer by many people and assumed that if you have adequate retirement savings, you can retire at some point before age 70, not take social security until 70, and then claim the maximum possible benefit, which should hit a break-even with having taken the benefit at full retirement age around age 78 and 8 months. However, here is the trap: For those with retirement savings, the cost of spending the tens of thousands of dollars in retirement assets to cover the three-to-five-year period of taking social security “later” can cost more than the lifetime benefit of social security. Let’s say your social security benefit is $30,000 a year at age 67 and would be $37,200 at age 70. That means to cover the difference in benefits for three years, you’re likely spending $90,000, and with 3% inflation, you’re spending $92,727. Over the three years that you’re spending that cash, at a 5% rate of return, the first year is costing you $71,590.64 in accumulated interest, the second year is costing you $69,655,58, and the third year is costing you $67,757.38 over the next twenty-five, twenty-four, and twenty-three years respectively (this assumes you’re living until 92,) for a total of $209,013.60, for a return of $165,600 in extra social security income over the same time period (though that is likely to have some inflation adjustment.) That’s a $44,013.60 loss in return for delaying social security, which is far from the belief that delaying will be a benefit! Ultimately the paradox here really has to do with life expectancy, a desire to leave a bequest to your heirs, and assumptions about inflation.

There’s an expression in the insurance world: “Life insurance isn’t bought, it’s sold.” This reflects the reality that many life insurance policies would otherwise be disregarded or ignored in favor of cheaper options but for a dedicated sales force of agents pushing products on an unsuspecting public. This shows up in endless advertisements, blog posts, steak dinner retirement seminars, and even TikTok channels. A few common sales tools that have little to no actual value in them:

All of these are popularized and branded sales pitches for life insurance products. A 7702 plan is just a technical name rebranding of the cash value in a life insurance policy, but it sounds really snazzy and is often used as a tool to help business owners create executive compensation plans; doctors and high earning professional services firms, in particular, are often targeted by people trying to sell these products, but in fact, they’re just incredibly expensive low appreciation vehicles.

Bank On Yourself/Infinite Banking suggests overfunding a small whole life policy and then using the cash value and death benefit within the policy as a cheap source of financing for other expenses such as investment properties or discretionary expenses. Yet these policies typically have several years of surrender costs built into them that make them functionally unusable for the first few years, and after they have passed that point, the financing terms are often variable and subject to change with the interest rate environment, offering little to no advantage over conventional financing options, and often a loss in financing terms when the cost of the underlying insurance is considered!

The paradox undermined by all of this is that much of permanent (both whole and universal life insurance) is sold on the premise of getting the best of both worlds out of policies (life insurance protection and specially treated accumulation of the cash value,) when in fact it’s an expensive version of life insurance and it’s generally a terrible accumulation vehicle with sub-par tax treatment.

It’s well known in America that we have a contradictory stance on debt. Debt is “bad,” but also we have more consumer and commercial debt than any other country in the world. This funnels through talk show host talking points about getting debt free ASAP, but this is often sub-optimal for wealth accumulation. There are some points where paying off debt quickly makes a lot of sense: payday loans, credit cards, and unsecured debt costing you in excess of 10% is a wealth destroyer, and you should fight to get this paid off ASAP. On the other hand, low-interest debt such as student loans, auto loans, and a mortgage can be incredible wealth builders. The secret behind this is that all of these provide leverage. For example, student loans are often high interest in excess of 6% a year; but even with this high-interest rate, the rate of return on many equity indexes is close to or exceeds 10% annually. The margin between making extra payments on the student loans versus engaging in those long-term equity investments can be several percent a year, which easily compounds to dozens or hundreds of thousands of dollars in interest. In the case of auto loans and mortgages, the same math applies. Many people have financed homes over the past decade at historically low rates of interest, while inflation has recently peaked at 8.5%. This functionally means that mortgages at 2%-5% are below the rate of inflation, which translates to your mortgage getting cheaper rapidly year over year in terms of the cost of the dollars invested in the mortgage, while also accounting for the fact that once again, you could invest the difference in funds tracking indexes that traditionally have yielded closer to 10% annually. Thus, while getting debt-free is a classic piece of advice given by the well-intended, carrying low-interest debt long-term and leveraging it to increase your earning power and to take advantage of higher-yielding investments is often a much greater long-term wealth builder.