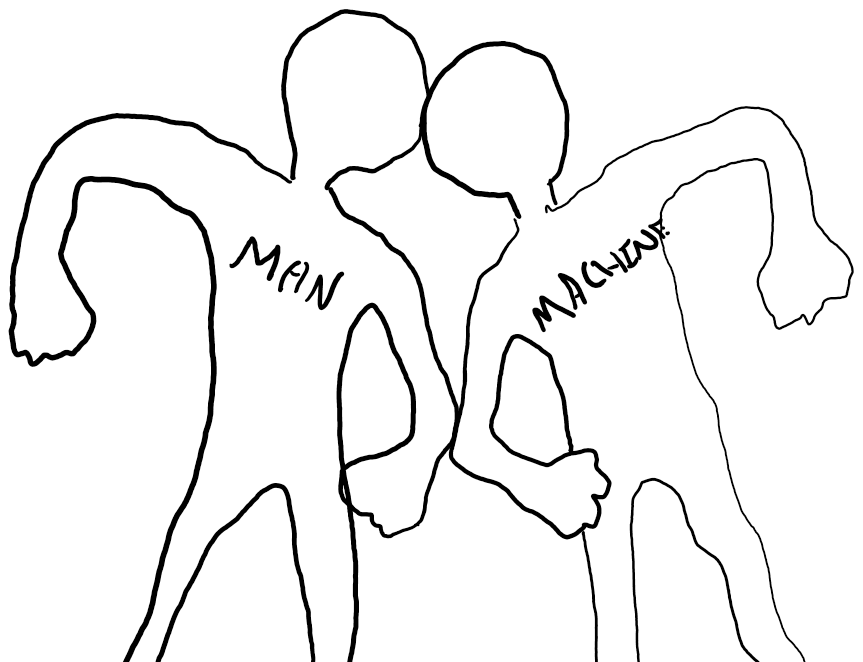 A recent study by Vanguard researchers, Dr. Paulo Costa, Ph.D., and Jane Henshaw, has been conducted on the differences in value between human financial planners and the digital advice offerings of “Robo-advisors,” such as Betterment and Wealthfront. The results of this study of man versus machine are stunning to say the least, not only because of its explicit findings in favor of human financial planners but also because of some of the data that’s buried in the observations of their study. The most incredible part of the study is that Vanguard provides both human and digital offerings to the public, but by the admission of its own researchers, finds that the perceived value of human advisors and the qualities of those who use them versus digital advice offerings are staggeringly different. Today we’re taking this long research paper and boiling it down to its essential elements for your educational pleasure.

This wasn’t a small straw poll taken from a small group, or from a group of clients simply answering Vanguard’s questions. The study was conducted anonymously by the researchers to hide their affiliation with Vanguard, with 1,518 diverse respondents that represent the national population of investors with $100,000 or more in assets serving as the study group. This means the study examined those both using human advisors, digital advisors, and both, as well as the mass affluent, high net worth, and ultra-high net worth, as well as representatives from each generation. Summarily, we would describe the findings of the study, in academic terms, as “statistically significant.” An interesting observation in the control analysis of the study is that there were no statistically significant differences in correlation between response groups, with no less than 0.94 correlation at the most extreme divergence, where a correlation of 1 would represent a perfect correlation.

9 out of 10 Clients Are Satisfied and Dissatisfied

One of the key findings of the study is the level of satisfaction and loyalty reported by clients of human advisors as compared to digital platforms. The study found that 9 out of 10 clients of human advisors if asked to pick a new advice service today, wouldn’t change from a human advisor. Of that group, 17% would consider using a human-digital hybrid offering. In turn, only 4% would switch to a digital offering, while the remainder simply wouldn’t use any advice at all. In turn, 88% of clients of digital advisor platforms would switch to a human advisor, while only 6% would remain steadfastly loyal to their digital advice provider. This is an enormous satisfaction gap between the users of human versus digital advice services. To compare this to something like a net promoter score methodology, it’s like a satisfaction scale of 9 out of 10 to 2 out of 10. When was the last time you used something that you’d rate 2 out of 10 that you kept using over time? When’s the last time you got rid of something you were 9 out of 10 satisfied with?

The Value of Advice

The study used a framework from Paliaro and Utkus (2019) to examine the value propositions of advice offerings, which breaks the value into Portfolio Value, Financial Value, and Emotional Value. When comparing the emphasis on perceived value by human advice. clients versus digital advice clients, an immediate skew in the perception of the value of the advice arises. 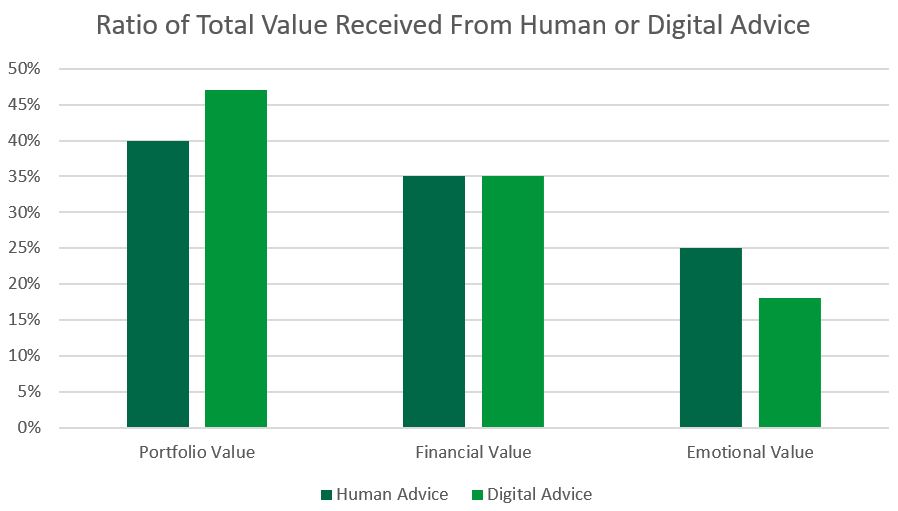 The portfolio value measure encompasses portfolio risk/return optimization, tax efficiency, product expense reduction, rebalancing, and trading activity (i.e., ongoing management.) The study found substantial and telling responses from the users of human and digital advice. Human advice clients self-reported a perceived rate of return in their portfolios of 10% per year if they were to self-manage their investments. In turn, they reported their rate of return to be 15% per year with the use of a human advisor. This 5% gap is an enormous span of 1/3rd of the perceived return on investment from the use of a financial advisor. It’s noteworthy that both 10% and 15% are extremely high returns from a historical standpoint, with aggressive equity indexes often averaging between 8%-12% in the long term with significant volatility along the way. However, this makes the contrast to digital even more staggering. Clients of digital advice offerings reported that they believed they could attain 21% returns on their own, with their digital advisor enhancing that by 3% to a return of 24%. These figures are gobsmacking for a number of reasons: First, the perceived value of digital advice is only 60% that of the perceived value of human advice. Yet, the more astounding element is the incredible level of borderline delusional overconfidence. In the past 30 years, the S&P 500 index has only broken a return of 20% 11 times, with an average return of just under 10% in that same time period. This means that the average digital advice user not only thinks they are likely to outperform the market by 100% annually but that even with a digital offering (none of which have ever averaged a 24% annualized rate of return since inception) that they’re largely capable of producing the returns themselves. Bear in mind, that one might assume that this simply reflects a difference in the risk tolerance profile or demographics of the response groups: Don’t worry, these numbers were calculated after controlling for risk tolerance. Let me, a “human advisor” simply summarize it this way: I, as a professional with a full-time job in financial planning, do not think I can attain 24% annual average returns, or even 21% annual average returns, over any significant stretch of time. Nor do I think any professionally managed investment product can do so with any sense of reliability. I emphasize this because of the last snuck observation of risk in this analysis: If the users of digital advice think they’re going to attain 24% rates of return over the long-term or 21% rates of return on their own, they are in for a very rude awakening when they learn their goals are unrealistic or that they likely haven’t saved enough to accomplish their goals. Fortunately, the next metric of value captures some of those issues.

The next step of the study evaluated the financial value received from advice. Financial value encompasses the attainment of financial goals, management of saving and spending behaviors, debt management, retirement planning, insurance and risk management, and estate planning. In other words: All the other financial planning stuff; I’ll admit, I take issue with this division, but it’s not my study we’re talking about here! However, the study did find significant gaps both in financial goal attainment between those who used human advice and digital advice, and the perception of how much goal attainment was due to the use of the advisors. Those who used human advice reported that on their own, only 43% of their financial goals would have been accomplished, while with the use of a human advisor, they had accomplished 59% of their goals. That’s a 16% gap in the attainment of financial goals! Meanwhile, the users of digital advice reported they had only completed 50% of their goals, with 45% being self-achieved and 5% being attributable to their digital advice provider. Not only do digital advice users feel they have achieved less of their goals, but they once again attribute less of the accomplishment to the source they claim is helping them. Meanwhile, the users of human advice claim less personal financial efficacy but report higher levels of accomplishment due to the use of a professional. The study then took this a step further, asking respondents what the measure of the respondent’s financial goals would be. The median response came out to a million dollars. Translate that into accomplishment gaps, and that means the user of a human advisor attributes $160,000 of value to their human advisor, while the users of digital advice only attribute $50,000 of value to it. 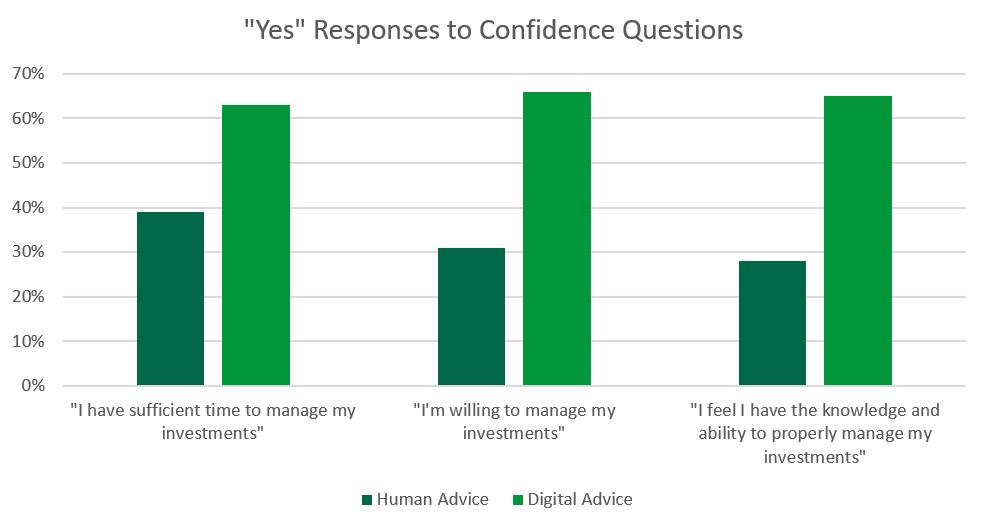 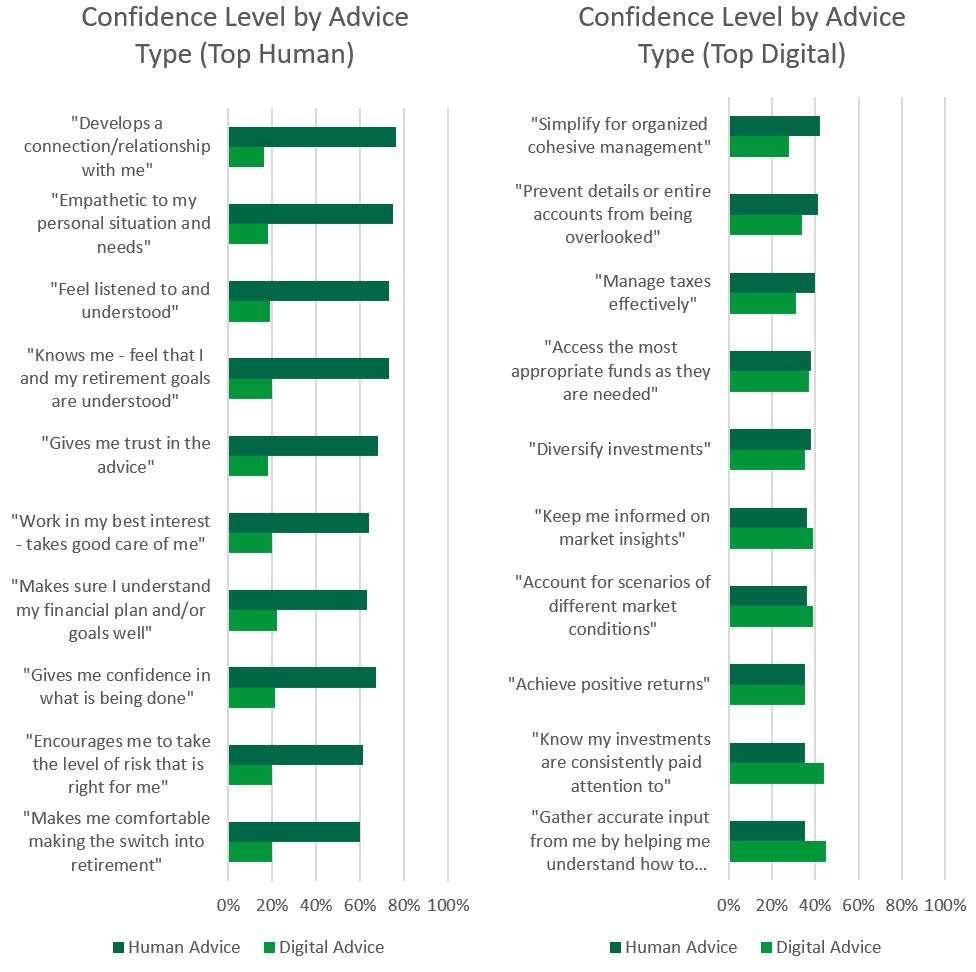