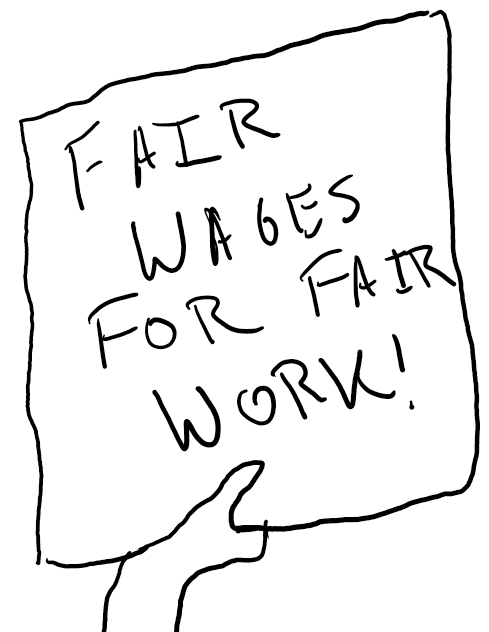 Recently a client raised a question about the assumptions of their financial plan. “It has my income increasing by inflation every year, but in another year I’ll hit the top of my pay band, and raises will stop unless I go into management when I’m not planning on doing.” This was a major red flag for me for a number of reasons. Not only because their wages would stop, but also because their organization had set a cap on earning potential for their employees. There is almost always a maximum viable level of compensation for any employee based on the simple economics of their job. If their position generates $200,000 of revenue, there is simply no economical way for their position to warrant compensation greater than that level of revenue, with the exception of those in internships and apprenticeships or developmental roles (since the return on the excess payment over revenue is likely derived from their future productivity.) But for any organization to simply say that employees cannot receive raises at all past a certain point smacks of exploitation, which is a word I don’t use lightly in the case of examining the question of a relationship between an employee and an employer. So today, we’re talking about compensation benchmarking, wages, benefits, and how you can maximize the leverage of your working time.

There is little out there in the world of economics that is researched more than wages. Hundreds of studies are completed annually, both generating new primary data for research as well as research studies using the data already generated to analyze the compensation of the working population. Some of this data is readily compiled from official sources such as the Bureau of Labor Statistics, which measures everything from inflation to occupational growth and decline. The bureau of labor statistics uses both reported payrolls and tax return data to measure compensation in just about every occupation that’s out there, providing you with a healthy national measurement of median and mean wages for various occupations, as well as estimates and projections regarding the growth or decline of demand for the field (i.e., the number of jobs that will be added or subtracted from that occupation in the future.) The limitation of this dataset is that it is somewhat backward-looking (reporting what has already occurred) and is limited to a national viewpoint; some regional adjustment then is likely warranted. For more localized as well as experiential information, sources such as Salary.com can provide more tailored information regarding the level of experience you have in a job role, your education level, and the geography you’re looking to work in. This can better inform you of a fair compensation benchmark for your locality or areas you might want to work in. After all, getting paid $60,000 to start might sound great in Colorado, incredible in Mississippi, and downright impoverished in Manhattan. Finally, there’s benchmarking for the organization itself. While this is a limited resource for those who want to work in small or local businesses and organizations, Glassdoor can provide information on everything from compensation data by position, to interview questions and internal reviews of the company. People will often complain that self-reported sources such as Glassdoor are rife with the “complainers” leaving reviews rather than the quality employees, but the literature on self-reported data shows that while there can be a slight negative bias, most self-reported data tends toward the accurate rather than inaccurate. Consequently, while you should take reviews and whatnot with a grain of salt from such sites, you can probably trust that the self-reported data on compensation is reasonably accurate or representative of when it was published.

Once you’ve benchmarked wages for your occupation and the particular income you’d like to obtain from it, it’s time to consider whether your current compensation level is at, below, or above par for your experience level. Assuming it’s at par, it’s important to ensure that with each year of experience, you’re receiving wage increases that are at a minimum commensurate with inflation. That would mean that someone hired a year ago today should expect a raise of at least 8.5% at their one-year review if they haven’t already received raises. This isn’t rocket science, it’s simply applying the changes to the consumer price index to wages and insisting on being paid an amount today equal to what you were being paid a year ago. It’s not even a raise, so much as a cost of living adjustment. That CPI-adjusted raise is the bare minimum any employee should demand, let alone a premium for performance or expanded experience. Many employers will raise objections, citing “budget limitations” or a compensation scheme that gives higher raises to some and lower raises to others. Let our thoughts on this be unequivocally clear: If you are not given an annual raise that adjusts for inflation, find another job. It doesn’t matter what the company’s rationale is, it doesn’t matter what their excuse is, it doesn’t matter, period. There is no excuse you should accept for being paid less today than you were paid in the past by the same employer. All failures to adjust compensation appropriately are failures of fiscal management on their part, not on your part, and you do not deserve to be short-changed or punished for it.

There are three tiers of consideration with benefits: does the employer offer the benefit, does the employer pay for the benefit, and does the employer pay for your family’s part of the benefits? The first tier is simple: Yes, your employer should offer benefits. Even if the benefit for health, dental, vision, life, or disability insurance is entirely employee-paid, the access to the benefit is the most fundamental piece. While the affordable care act ensures that no one can be denied health insurance, the same protections are not afforded to dental, vision, life, and disability insurance. For example, if you are diabetic, you likely will never qualify for life insurance because of the actuarial risk associated with diabetes. Whether your employer would pay for your coverage or not is irrelevant, the simple availability of group coverage is a benefit that can help you and others avoid being discriminated against as an individual. At the next tier of whether an employer pays for the benefits or how much, comes a simple question of compensation and wage negotiation. Does it matter significantly whether you’re paid $55,000 and have $5,000 in benefits paid for by your employer versus being paid $60,000 and paying for all the benefits pre-tax and out of pocket? Not really. But it can matter more at an individual level if you’re part of a large family that has high healthcare costs or needs significant insurance coverage; and with respect to retirement plans, the research is clear: Most people do not save anything more than what their employer’s retirement plan matches or incentivizes. Whether the employer matches a lot or contributes a lot is one question, but the more important question is whether having a retirement plan motivates you to save and build wealth for your future. For example, at MY Wealth Planners, the matching rate is 6% (the maximum permitted for a Safe Harbor 401(k) plan). In turn, our personal savings rates average 12%, for a total retirement plan savings rate of 18%. This is because our plan not only matches significantly but also because the default “you must opt-out not to do this” savings rate is 10% of wages. Finally, when we consider whether the employer pays for your family’s benefits, this may or may not matter to you. It’s a fair employer’s philosophy to say that they want to keep compensation equal between employees by only covering the cost of the benefits for the employees, but for those of you with a spouse and children, finding an employer who pays for some or all of the family costs can be a game-changer.

Maximizing the Leverage of your Working Time

The bottom line up front is here: Do you work in your occupation because it’s the meaning of your life to work in that job, or is the meaning secondary to the fact that it provides you with an income to live your best life outside of work? For many, if not most people, it’s the latter. If that’s the case, it’s time to be mercenary about your compensation and your career. We said it before and we’ll say it again: Do not accept below the median and mean wages for your career choice in your professional field at your level of experience. Do not accept that less-than-CPI raises can be offered; and when I say “do not accept”, I mean it literally. When your manager smiles and says “We’re giving you a 3% raise, congratulations!” Your response should be “CPI right now is 8.5%, so that’s not a raise. If I deserved my starting comp this time last year, I deserve 8.5% now.” If they give it to you, great, and if not, start looking for other work. If you work somewhere without benefits, seriously consider whether you’re okay with that or if that lack of provided benefits is coming out of your pocket (i.e. not offering health insurance means you’re paying for it yourself.) The cost of benefits can be cut to the tune of over ten thousand dollars a year either against your salary or against your employer’s budget; with much love to your boss, I always suggest making it part of your employer’s budget. Finally, never fail to negotiate. Some organizations have pay scales and clear standards for who gets paid what. If you think that table and schedule are fair, no fuss should be made. But if you apply for a job that posts a compensation range of $60,000-$80,000, be damn sure you ask for the $80,000 unless there’s an incredibly clear reason why you shouldn’t. If it’s budgeted for, you should ask for it. After all, no one is going to negotiate on your behalf, so you must be your own enthusiastic advocate.

A Note for Employers

If this piece concerns you or raises the specter of union cards and employees protesting outside of your business, consider this: Unless your organization has a truly incredible purpose (solving world hunger, curing cancer, etc.) it’s likely that your employees are happy to work for you and would be just as happy working elsewhere. Part of our responsibility as employers is to provide the best working environment for our employees. Sometimes they want something we can’t provide, but if you’re not making your best effort, it’s on you.