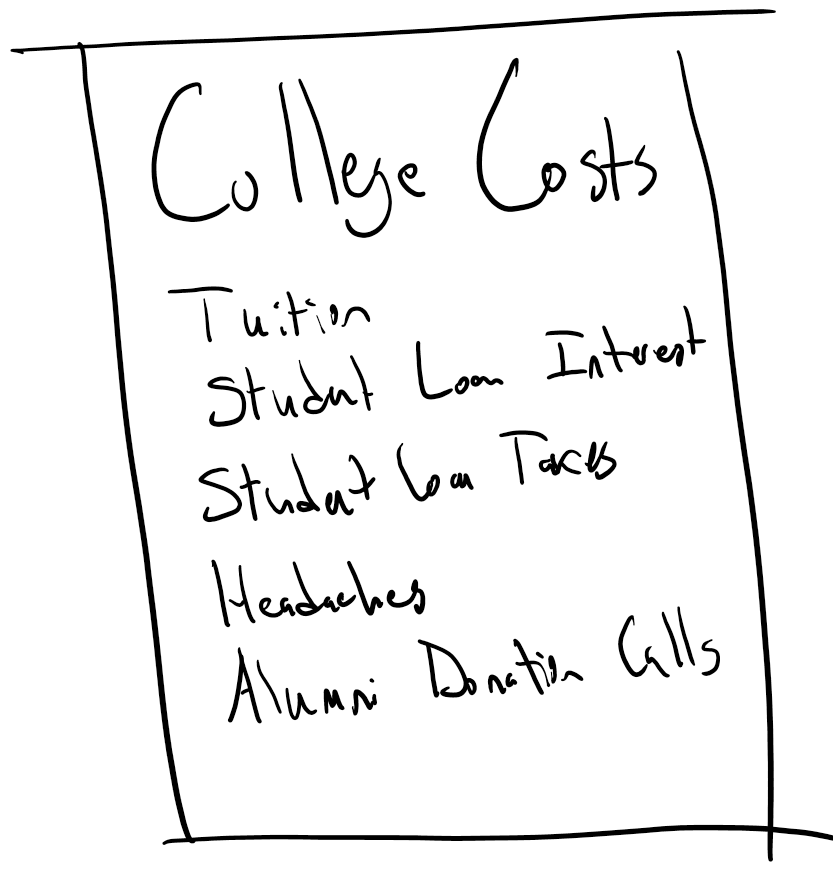 It is regularly observed in our public discourse that the cost of higher education has risen astronomically over the past several decades, outpacing inflation by a factor of three. Yet, with the increase in cost to higher education has come an increase in access to higher education. Approximately one in three Americans hold a college degree, and while it’s argued that wages have remained stagnant on a relative basis, multiple measures of quality of life have continued to increase during the same time period. Ultimately, the pace of increase in the cost of education has led us to the point that student debt cumulatively has reached approximately $1.75 trillion dollars; for scale, total mortgage debt is about 10x greater. This has often led to loud public outcries for student loan relief and other mechanisms to ease the potential burden. While this may come to pass in the future, it leaves something to be desired both for those entering college at the present time and those who have already accrued significant debt and who are now faced with paying the bill.

Preparing For the Cost of College

First and foremost, students should not be graduating high school to then say “okay so how do we do this college thing?” Preparing for the cost of college is a multi-year -if not decade-plus- event that has to be coordinated carefully between both the student and the parents. For starters, the student’s own property is taken into major account when it comes to qualification for financial aid and scholarships. Assets held in the student’s name are treated as being 50% available for paying for the costs of college. Thus, fifty cents on every dollar in a checking account or UTMA account are qualified as being for tuition, which can severely hamper the probability of qualifying for Pell grants or subsidized Stafford loans. A major exception to this is the 529 plan, which while being a tax-advantaged vehicle for college, is treated as having no value where qualification for student financial aid is concerned. Additionally, there is a lookback for parental income for the prior two years. Parents who may be reaching their highest earning potential around the time kids go to college may inadvertently earn their way out of their children’s financial aid; if there has ever been a consideration of early retirement or cutting back on hours, the two years prior to and during college are significant.

Maximizing the Return on College

Much attention is given to the idea of legacy children attending their parent’s colleges, with a particular eye toward ivy league and top-tier schools. I’ll make this point clear at the outset: if you want to attend a top-tier college for your specific educational interest, and get into that college, then the cost of said private or out of state school might be worth it; particularly if it is a feeder to a particular career track (i.e., top tier law schools or major companies in the field target their recruitment to that school.) However, if the desire to attend a private college or to go out of state stems from a simple desire for adventure, pump the brakes. Such educational opportunities typically cost two to four times as much as an in-state public college; even an in-state public college can cost two to three times as much as the junior or community colleges in the area. Thus, researching the potential or desired careers that a degree will provide and getting a ratio of likely first-year salary to the total cost of loans or expenses should be considered. It is ideal if a first-year salary exceeds the total load of student debt. It is acceptable if the student debt load is equal to one to two years of the likely level of income. But if the debt level exceeds two years of income from the degree, you should give serious pause to the selection of that school and program unless you’ve planned a way out of them. Thus, the amount of student loans taken out is only important relative to the income potential they provide; it’s considered normal for medical school students to take on as little as $200,000 or up to half a million in student loans depending on their school and specialty; this is widely considered justified by post-residency incomes starting well over one hundred thousand, into the several hundreds of thousands depending on specialization. Conversely, it may not make sense for a philosophy major to take on any more than twenty to forty thousand dollars in student loan debt for their degree, as (with respect) the philosophy majors simply don’t earn that much.

The Cost of Student Loans

Of course, the much-ballyhooed problem of the cost of higher education is the student loan burden that falls upon graduates. This comes in the form of the repayment schedules, which have adjusted and changed over time. Most repayment plans for new borrowers today come under a few specific headers:

Ultimately, it may appear that a student loan (depending on the repayment plan) might amount to little more than a 10% income tax for a limited period of 20-25 years. However, as we’ll discuss next, there is a trap waiting at the end of those terms.

While public student loan forgiveness is difficult, it is also the only version of forgiveness that means what you think it should mean: that the loan goes away with no strings attached. However, for those under IBR or REPAYE, student loans that reach their twenty or twenty-five-year term are “forgiven” in a taxable manner. You see, the IRS treats forgiven loans as income, regardless of the source. This means that for someone with $100,000 remaining on their student loan balances at the end, they may owe both federal and state income taxes on the balances, amounting to anywhere from $22,000-$53,000 in additional taxes depending on their other income and where they live. Thus, in calculating the IBR or REPAYE payments of “only” 10%, borrowers must also complete a complex forecast of how much is likely to be forgiven at the end of their loan, and start a saving and investing program that not only increases the cost of the payments to an amount greater than 10% of income, but that must also account for investment risks and future capital gains taxes on the proceeds of those investments.

Another noteworthy issue is that of private refinancing. While many borrowers find themselves receiving daily or weekly solicitations from lenders offering to help them refinance their student loans under a single low-interest loan, this can be a major trap for borrowers with significant balances. While the refinance and interest rate may make the monthly payments more affordable, most of these private consolidation loans are not forgivable. As a result, borrowers who are unable to make the payments may find that they are stuck with lifelong student loan payments, which cannot be discharged in the event of bankruptcy or insolvency. This isn’t to say that refinancing and consolidation are intrinsically bad, but the borrower must be cautious in their assumptions around how they will get their loans taken care of and whether the refinancing might cost them more in the long run.

So, what can you do?

Whether you’re a college student or someone already out of college, a couple of pieces of advice are critical: First, make sure the cost of college is or was worthwhile. College is often marketed not only as a gateway to higher income but also to an experience. Is lifelong debt worth a short-term experience? This also applies to the temptation to “go back to school,” as there are, unfortunately, many worthless master’s degrees out there as well as bachelor’s degrees. The cost of a higher level of education must be attached to a return on the investment, or it’s simply a waste of both time and money. Next, the repayment plan for student loans must be selected with a careful eye towards both affordability and the potential future cost of forgiveness. If you’re not comfortable with all the math involved, reach out to a financial planner or financial counselor for help with the calculations. Finally, help others: every year millions of Americans assume significant student debt to better and advance their lives, but not all of them have had the opportunity to learn from something like this. Be sure to share this blog and what you know with the college-bound people in your life.