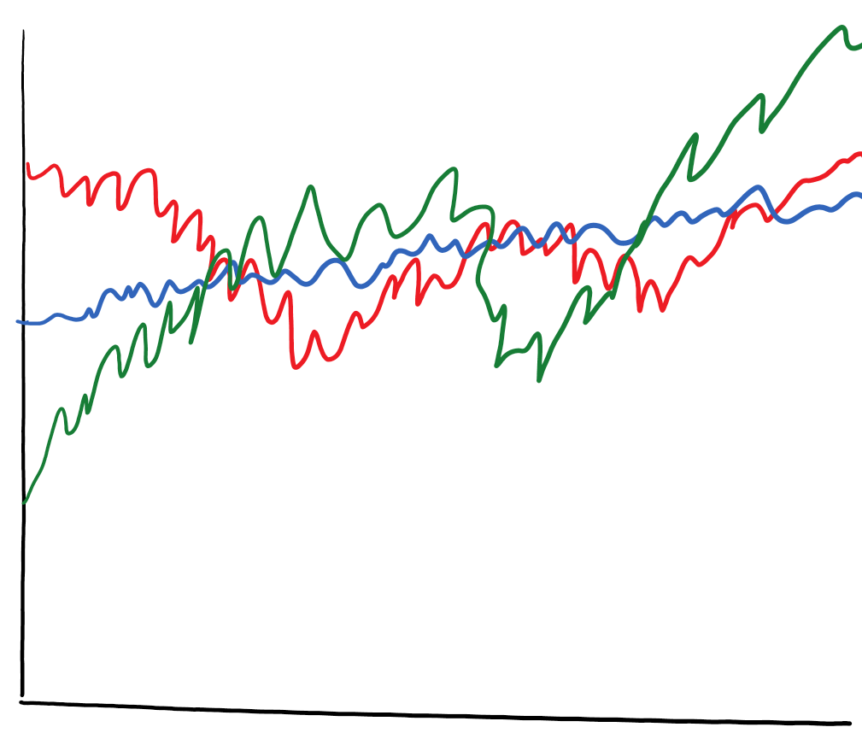 As a financial planner, I’m essentially bound to watch the news on a day-to-day basis. Tongue in cheek, the writer, Carl Richards, likes to call financial news “financial pornography.” This largely derives from the fair observation that most financial news is engineered to drive clicks and eyeballs for advertising revenue, rather than to provide any realistic or valuable insights about what you should or shouldn’t do with investments. Ultimately, the persistent presence of red and green arrows and line charts in the news relating to the push and pull of markets has less to do with keeping the public well informed, and more to do with being exciting entertainment. Enter in the omnipresent algorithmic reporting that comes with certain market movements. Market index drops by 100 “points,” and the news will inevitably say “index dips on [made up reason].” Market drops by 500 “points,” and the news will invariably say some version of “plummets on news of [made up reason].” The simple fact is that the desire of the newsmakers to drive attention leads them to somewhat lazy, and occasionally distressing reporting on the current events of the day. This inevitably leads us to take the news of index movements to heart, despite the fact that we may often misunderstand what they’re actually telling us. So today, we’re discussing how indexes actually are constructed, function, and what they do and do not tell us.

What is an Index?

A market index is a basket of securities constructed by a financial institution to provide some form of measurement regarding the activity or health of a particular marketplace. Some are broad, for example, the Standard & Poor’s 500 Index (S&P 500) is regularly used as a barometer of the health of the US markets. It is supposedly made up of the 500 largest US companies, although a decision-making committee ultimately decides whether companies are added into the index and whether other companies fall off. Most importantly, the index tracks the going share prices of the securities underlying it, representing a market-size adjusted valuation of all the securities within it. Other indexes attempt to track things like short-term or long-term bonds, the economy of another country, or various regions of the world.

What Doesn’t an Index Track?

A major omission from many people’s understandings of indexes is what it doesn’t track. For example, when a company with a stock price of $100 pays out a $1 dividend, the moment that dividend is paid, the price of the stock drops by $1 to $99. An index containing this stock, in turn, will decline by $1 in the scheme of how it calculates an index value. This means that while the dividend payment of the company is a valuable activity that pays out genuine profits of the company to its shareholders, the index only cares about the “face value” of the stock, meaning that it will reflect a decline in the value of the index, even though the holders of an investment in the index have not lost any value. This is a major issue in measures of indexes over time. For example, many market observers refer to the time period between 2001 and 2009 as the “lost decade”, pointing out that many index measures of the US Stock Market during that time effectively hit a peak and then fell for a period lasting about a decade before finally surpassing the high of the tech bubble. Yet this observation ignores that during that decade, companies paid out billions in dividends and interest to the various shareholders and bondholders during the time period. While the “face value” of indexes waffled for a decade, investors still made significant profits and returns throughout the time period; they simply only made them from the dividends and interest rather than the appreciation of the underlying shares. This is much akin to owning a house for a decade and renting it out; the sale price of the house might not have changed, but the rent was very real and profitable.

The Snuck Premise of Index-Tracking Products

Another common issue with index tracking, then, is that there are products that claim to track indexes. Various insurance products such as Indexed Annuities and Life Insurance may lay claim to track the return of the S&P 500 or other proprietary indexes, yet such an offering fails to capture the value of the index as produced by the dividends and interest payments from the underlying shares. In fact, some indexes are constructed to maximize this issue, showing very conservative appreciation for clients, while maximizing interest and dividend payments so that the companies can pocket the cash flows while only crediting their contract-holders with the face value of the index. It’s ultimately very important for investors to carefully differentiate between products that invest in the underlying assets of an index, such as an S&P 500 Index mutual fund, and products that “track the value” of an index, such as an indexed annuity. The results between the two will vary dramatically.

Understanding Indices: What good are they?

Well, despite their imperfection, they are a measure of market movements. We can see if the Dow Jones is rising or falling that there is at least some level of gain or loss in the underlying securities, which in turn reflect the sentiments of the marketplace about the underlying securities. Yet, even as the S&P 500 has declined year to date, various companies within it continue to post record profits and pay all-time high dividends to shareholders, and year-over-year it’s still double-digit percentages more valuable than it was a year ago. It ultimately behooves us as the investing public to keep an eye on indexes but to remember that our portfolios are not perfectly correlated to them; while we might hold an S&P 500 index fund and see it rise or decline with the index, we shouldn’t forget about the cash flows it produces. We also should recall that if we’re not fully aggressive (i.e., 100% invested in equities), it makes no sense for us to panic when we see equity indexes declining while the interest payments of our bonds are relatively assured (particularly when issued by the Federal government). It has to be said time and time again: short-term volatility in the marketplace is common; we don’t pop champagne every time the market climbs by a few percent as often happens, but it’s human nature to be afraid when the market declines just the same. It ultimately behooves us to continue keeping our eye on the long-term vision and to stay the course.