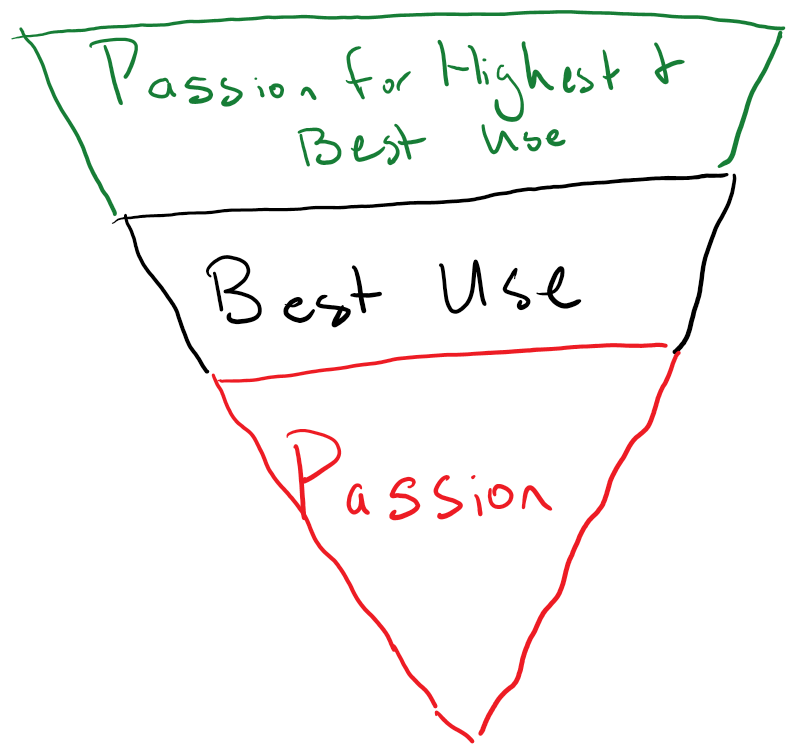 There’s an odd term that often comes up in business school: “Highest and best use.” The fundamental point of the term is the argument that only certain professionals are enabled to perform certain tasks either by skill, experience, or licensure. Consequently, the business phrase “highest and best use” refers to ensuring that those professionals spend as much time as possible on those particular tasks, and that other “lower” uses of time are relegated to other staff members. However, this principle often comes into conflict with other human interests. Doing work that the individual likes or finds meaningful can override the idea of highest and best use, while in turn their organization can suffer from that distraction.

Defining Highest and Best Use Within a Team

As described before, highest and best use refers to the most critical function any individual on a team can provide. For someone like a lawyer, it’s spending time on client-facing activities that generate billable hours. For a surgeon, it’s performing procedures. For slightly less roles such as simply being a business owner, it’s focusing on the growth of the business to increase revenue or the efficiency of the business to increase profits. Other roles such as greeting clients in the lobby, doing patient intakes or blood draws, or even picking up the phone the first time it rings can be considered lower uses. The basic argument here then is that any role that doesn’t improve on those things should be delegated, whether by hiring an equal team member to provide bandwidth on the current asks, hiring a lower level team member to take over low level things, or dropping the task altogether if it’s possible.

The Distraction of Passion over Efficiency

Not to knock passion, but it does somewhat tend to get disproportionate attention. While passion can keep someone engaged and interested in their work for many years to come, it can often become the downfall of an organization. Many people start businesses or get into a particular career field based on their passion for a particular interest or hobby. For example, most trades businesses start out as an individual tradesperson working as an independent contract. They go to work as a carpenter or plumber, plying their trade until the demand for their work continues to grow and the quality of their work improves. Their next step might be to hire an apprentice, someone who they can teach to increase their bandwidth. Eventually, the demand might grow to the point that the apprentice is taking their own jobs, geographically separate from the original tradesperson. If this continues, they may find they’re spending more time on the phone coordinating bids and taking customer calls than plying their trade. Enter in a second apprentice or an office manager. As this trend continues, the tradesperson eventually finds themselves in one of two positions: Either with a business that’s going to collapse under the demand that they can’t satisfy, or no longer going about working the trade they originally started with. Was this their intention? It’s unlikely that they intended to get this big at the outset (otherwise they might have gone to business school instead of trade school). Given their original interest was in their trade, the headache of growing the business might cause them to experience that same conflict of their original passion versus their “highest and best use” as a business owner, which is no longer being a tradesperson.

Lest you think this is a first world problem only experienced by owners, you would be wrong. The peter principle is a business principle that suggests managers will rise to their highest level of incompetence; meaning their career will grow so long as they are competent and then they will stall out at the level they’re not really that good at, thus creating a layer of incompetent middle managers in organizations (that’s not to say your current manager is incompetent, they might still be climbing in their career to that point.) However, this then means that even employees who love their current jobs or the jobs they applied for in the first place could be “pulled upward.” Just about everyone has worked on a team with diverse experience; there’s the core group that’s been there “close to the average time”, the new people, and the one or two “salty veterans” who’ve been doing this thing since before you were alive. Those veterans are often examples of those who have fought back against the pull of their own careers, keeping to their preferred task; yet for the rest of the team, it is likely that given enough time, those who excel the most at this level are likely to be rewarded with promotions or increased responsibility. Ultimately, this might be their individual intentions (to which we’d say “no harm done”) but for others who are happy at the team level, a conflict arises when their career potential (or perhaps pressure from friends and family) forces them to take the next step up the ladder.

Solve This By Being Intentional

While life is full of surprises and unforeseen results, being intentional in the growth of your career or business is important. Doing the research of compensation, job responsibilities, what a “day in the life” is really like, can help you avoid ending up in a position where your highest and best use demands that you be miserable. If you are enthusiastic about being a leader, starting an organization or being aggressive in your career to climb the ladder are suitable choices. Alternatively if your real interest lies in being a master of your craft, saying “no” to opportunities for business growth or starting a conversation with your manager early about your goals can help avoid conflicts of passion and best use. Most organizations would love to have a specialist who has no interest in promotions so long as they get to be good at what they like; the organization then simply needs to focus on how to reward that individual so they continue to feel valued. If you are that individual, do yourself the favor of being intentional starting today. Start saying no to non-ideal clients who don’t give you the opportunity to do your best work. Start a dialog with your manager about where you are and where you’d like to get to in order to stop from being pulled in the current of your career trajectory. Given the right time and effort, your highest and best use might just be where you want to go or where you currently are.