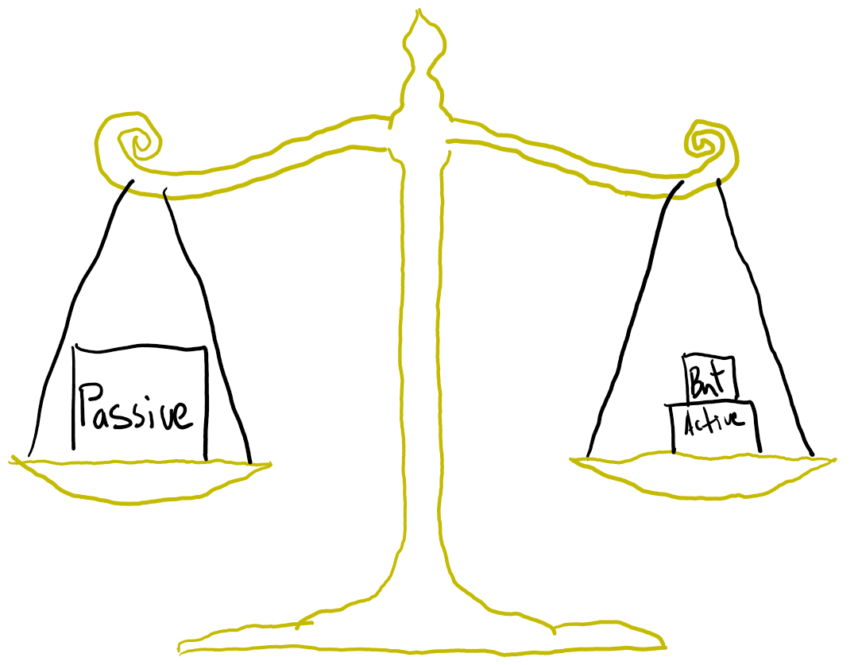 Our firm is a passive investment management firm. Literally, every investment we select for clients is an index-based exchange traded fund that tracks a benchmark such as the S&P 500 or a bond index. We do this for a number of reasons: first, the research shows that the majority of actively managed investment products fail to outperform their benchmarks over an extended period of time. Second, actively managed investments tend to cost anywhere from six to forty times as much as their passive investment product cousins, and another significant number of studies have shown a statistically significant relationship between the cost of an investment and its underperformance. Finally, we’re simply not going to pretend that we’re a mutual fund company. To compare, major mutual fund companies have dozens if not hundreds of portfolio analysts supporting a portfolio manager, watching minutiae such as the price of rice futures in Indonesia day in and day out, seeking arbitrage between the price of assets and their actual value. To pretend we’re going to compete in active management against companies deploying hundreds of millions into research annually who nevertheless fail to beat their benchmarks consistently is simply wishful thinking. To which then a point of interest occurs: We engaged in a bit of active management last week.

The Impetus for Active Management

To be clear, we did not go stock picking or suddenly fancy ourselves the next Warren Buffett last week. No, simply put, we saw an upcoming danger and chose to respond to it. The key distinction here was that while we use a passive index-based philosophy for our securities selection, we are not asleep at the wheel. We engage in active management of our client’s assets on a regular basis, in fact. For example, during declines in the market, we perform activities such as tax-loss harvesting: realizing losses in certain investments for the tax write-off while quickly switching into similar but different assets in order to stay fully invested. Nominal active management risk, no attempt to outperform the market, simply capturing some tax write-offs. We also engage in systematic rebalancing, which has been shown not to improve returns, but to reduce risk. We could passively sit and let our assets grow out of proportion over time, but then we’d be passively allowing the risk in our portfolios to grow unchecked: not a great idea. So what was the active management that we engaged in? Well, we decided to dodge a bullet.

Active management in fixed income differs from equities. While equities are often purchased less for their cash flows and dividends and more for the growth potential of the company, or because of one-time events such as a merger or the change of a CEO, fixed-income assets are by design meant to be held for specific terms. In turn, this exposes them to a different set of risks than stocks, including things like reinvestment risk (“What if it expires and I have to reinvest at a lower interest rate than I was?”) and interest rate risk (“If interest rates go up my current holdings lose value.”) In short, with the Federal Reserve announcing it would likely raise interest rates at least three times this year, we’re choosing to address the latter risk. Over the past two years, our fixed income portfolios have been intermediate and long-term holdings, providing higher yields for the duration and benefitting when rates went down in 2020. Now that we’re facing imminent increases in the Federal Reserve rate, it seems foolhardy to sit back and let those assets lose value. In response, we decreased the duration of our fixed-income holdings to less than 2 years last week, which makes the impact of interest rates nominal rather than substantial as they would otherwise be.

What I just described might be considered blaspheme by a die-hard believer in passive investing. In fact, to describe what we did on a Boggleheads forum would likely see us mocked and insulted for believing we can time the market. But here’s the thing: We don’t believe we can time the market. We’re simply listening to what the Federal Reserve is openly announcing to the world and responding rationally to it. If they change their position and announce they aren’t going to raise rates, then we’d return to our old positions. While a die-hard passive index believer would say that it doesn’t matter if the rate changes, we should simply hold the investments until the end of time, it doesn’t make sense to hold onto an asset we know will lose value (at least barring the event that the Federal Reserve reverses its course and admits it lied, which seems unlikely.) If you had a time machine and went back to 2002, would you buy and hold Blockbuster stock in spite of what you know happens next? None of this is to say that we believe we can see the future or that we’re smarter than the average bear. It’s simply a rare and specific decision to reduce our exposure to risks we can see in our portfolios and a decision to pull back from that risk.

As we close up this minor report, it bears repeating: This is not an endorsement of wholesale active management, stock trading, market timing, or technical analysis (which we should reiterate, is just astrology for finance nerds.) The research is just as clear that overtrading investments can drag on returns by over 2% per year and that the average retail investor’s returns are anywhere from 3%-6% lower than the returns of the assets they’ve held throughout the year. Chasing returns, panic selling, or otherwise engaging in “day trading” are surefire recipes to get yourself into trouble. The adage is a bit sad, but it’s simply true: investing should be as boring as watching the grass grow. If you want entertainment out of making wild bets, go to Vegas. It’s a lot faster than the market and they have free drinks.