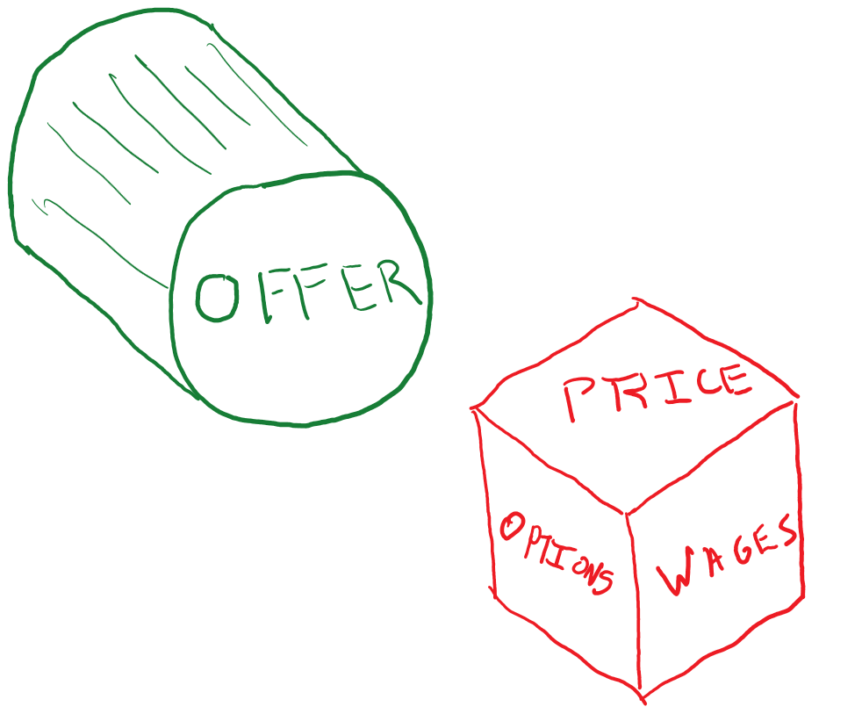 Compensation by its nature is one of the most important and yet most taboo topics in our society. Despite the well-accepted fact that if everyone talked about money more, we’d likely all be doing a bit better by the simple merit of having more information in our salary negotiations and price discovery, we tend to keep our numbers close to the chest. In fact, the issues with information and price transparency between parties are so substantial that a Nobel Prize-winning paper on the cost of “lemons” in the marketplace for products points out that the price of a new car doesn’t come from the fact that it’s new, but that it provides a form of risk avoidance in an uncertain marketplace for used cars. For those who are new to our newsletter (welcome) or who haven’t caught on, outside of my work as a financial planner I’m a Ph.D. student who studies compensation models and conflicts of interest. In the interest of giving my audience the occasional peek behind the curtain, today I want to talk about what I’m casually calling the “square peg” problem of misfit compensation.

No One Wants to Work

Over the past year or so, the phenomenon of the “great resignation” has caught a lot of media and social attention. When millions of people forgo employment for “something better,” we tend to take notice. This is emphasized even more when faced with signs on almost every small business and restaurant’s door declaring that they’re hiring, and well above minimum wage. Before the pandemic, I’d have told you the minimum wage was twelve dollars an hour and that the proxy minimum wage in Boulder County was fifteen. Today, the unofficial minimum wage is around fifteen dollars an hour and the proxy minimum wage is creeping towards twenty. Yet despite this boom in compensation, well outstripping the pace of inflation (high as it was last year), we still see an enormous number of jobs unfulfilled. Herein we come to a confusing paradox. While logically it would seem obvious that people need some form of assets or income to live on, the current research on unemployment rates in various parts of the country shows a contradiction. In states where enhanced unemployment benefits have been withdrawn, unemployment has not significantly changed as an observable effect of that withdrawal; yet we see at the same time that traditionally “red” parts of the country have lower unemployment while traditionally “blue” parts of the country have higher unemployment. This suggests that it’s not the enhanced unemployment that drives the resignation but perhaps something more cultural or in the zeitgeist of the moment about making a decision regarding one’s future. “Is the amount of money, benefits, culture, or work type, better than the opportunity cost of pursuing something else to me?”

A phenomenon many may be too young to know about is that economic crises tend to create a boom in entrepreneurship. As the old saying goes: “necessity is the mother of invention.” This has occurred in each recession since the mid twentieth century, and is largely driven by our real estate market. Follow me here: When a person with an adequate job is let go or laid off as a consequence of the economy, that person often will say “this is the time,” and use resources such as their savings and home equity to finance the start of a business. They’ve often had an entrepreneurial interest before, but now faced with no income, there’s simply no time like the present. As a result, we see enormous spikes in entrepreneurship during downturns and the 2020 crash in GDP and is no exception. The reason this might seem unfamiliar is because the 2008 crash was real estate driven, and thus the resource of home equity evaporated for most would-be entrepreneurs to rely upon. This wellspring of small business generation leads not only to an increase in small businesses and self-employment, but also the opportunity to disrupt traditional marketplaces for goods and services. For example, in my own world of financial planning, a segment of financial planners specializing in DIY investors has popped up. If that seems contradictory, you’re not alone in being surprised; but the challenge these firms bring to the marketplace is offering a high ticket service (often starting at a price exceeding $6,000 per client) for an extremely limited engagement, providing financial planning to a segment of the population that has traditionally never worked with financial planners because they didn’t want to delegate or rely on someone else for the long term, they just wanted advice alone. Of course, these high tickets are necessary compensation levels for those firms. Despite costing often two to three times as much as the services of a traditional financial planner for the same level of work, the firm has to offset the fact that there will be no ongoing relationship. Thus while the price is well above market averages for financial planners, this is a disruption that opens up the service to those who would otherwise go unserved… for a premium price.

Finding a Round Peg for a Round Hole

Ultimately, the crisis of unemployment and the boom in new businesses leads us to observe one ongoing issue: people are trying to fit square pegs into round holes. Whether that’s trying to entice someone with entrepreneurial spirit back into the employee force of a company or people attempting to sell too much or not enough to the wrong customers, we’re still seeing frequent mismatches between the wants of the consumers and employers and the offers of the businesses and employees. Take the financial planning industry again: despite the repeated and frequent protest of students and career changers that they’re not interested in sales roles, the vast majority of entries into the financial services industries are just that: sales roles. As a result, the few salaried and benefitted non-sales positions are hotly competed for, and the majority of the sales seats go unfilled. “No one wants to work!” Cries the product hocking broker dealer, upset that it can’t take zero risk in hiring as many people as possible to sell for it on 100% commission. Meanwhile, even our firm bumps into this challenge increasingly. We’ve built our practice and services around an ongoing high quality service where the focus is on ensuring that the long term goals of our clients are achieved; as a result, we’re simply not a good fit for DIYers or people who think their problem will go away with the right question and answer. We don’t shout “no one wants financial planning” when this happens, but it behooves us to listen to the marketplace and to refine our message: We’re here for people who are serious about accomplishing their financial plans, not for people who think their financial issues are a temporary crisis. Ultimately, the process is not so much finding round pegs for round holes so much as attracting squares to squares, rounds to rounds, and so on.

Advice for the Employers and Businesses

Get real about what your business needs from its customers and employees and what it can provide them. In 2016 I calmly stated to a room of business owners in the Boulder Chamber of Commerce that if they were attempting to pay minimum wage to employees who literally lived on their wages, not part time high school kids, to “go fuck themselves.” It was a cruel and unrealistic expectation on their part that anyone could be so desperate as to try to live on a minimum wage of $8.31 as it was at the time. Even with today’s increased minimum wage approaching thirteen dollars an hour, I stand by that remark: It’s one thing to pay a minimal stipend for minimal work, it’s another thing to ask people to stake their lives on it and to demand a full labor load from them. On the part of what the business is offering to the public, be clear and don’t compromise. If you’re a high touch law firm, be very clear about your quality and services, and then charge appropriately for them. If you’re competing on volume and low prices, that’s great, just be sure that your work force is able to be adequately rewarded for that volume.

Advice for the Job Seekers and Consumers

As you’re seeking the “right price for you,” whether that be wages, goods, or services, get realistic about who you are and what you’re looking for. Despite the pressure on prices and wages, not all businesses and industries have enjoyed that boom. While you’re probably in a good position to negotiate for higher compensation at an understaffed restaurant, those working in the cruise and hospitality businesses are probably still struggling to break even. It’s also important to do due diligence around the services you’re seeking. In conversations with the accounting and tax preparation industry, many have increased prices by double digit or triple digit percentages. This isn’t simply a play for inflated dollars or greed of the owners, but playing catch up with the enormous mismatch of service pricing in 2021 to 2022; many firms and tax preparers charged the same rates as they had in 2020, not realizing the enormous burden of extra time issues such as the earned income and child tax credit changes could cause, the time suck of dealing with PPP and EIDL loans for business owners, and the ridiculous range of tweaks and changes to tax codes and relief bills that happened everywhere from the local government to the state and federal level. Those expecting the same two dollar shoe shine from their accountants shouldn’t be shocked to see a five dollar price tag this year, and it simply reflects the reality of their business. The last piece of advice on dealing with this, both in your search for a better job, company, price, whatever it may be, is to understand the concept of anchoring. We tend to base subsequent financial decisions around a framework of our original datapoint. If we were making forty thousand a year before the pandemic, a position offering sixty thousand seems like a godsend, even though it may require more hours, have less benefits, etc. On the other side, people who are seeking goods and services a the same old price shouldn’t be surprised when they see that, just like everything else, the price has gone up.