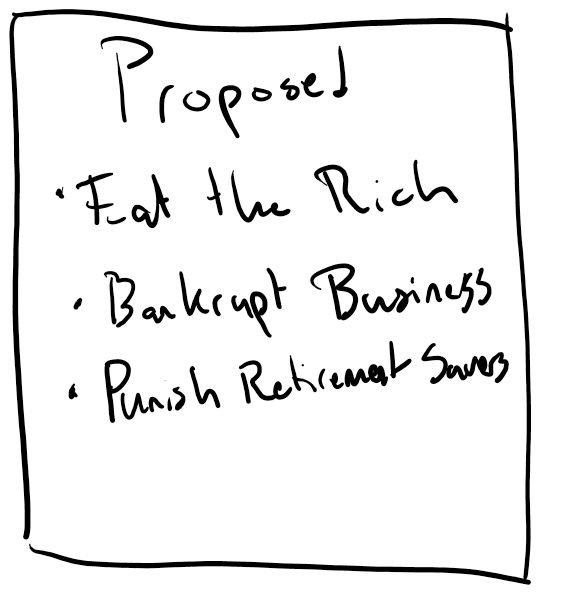 It’s no secret that laws are not written by perfect people, nor are they error free texts bestowed upon us by a higher power. In fact, it’s fairly well known that many laws are written in part or entirely by policy makers and lobbyists with an interest in the outcome of the laws. Yesterday, Congress released the text of the $3.5 Trillion dollar spending bill, numbering in the hundreds of pages. Among allocations to spend money with the bill came over two hundred pages of tax law amendments and changes designed to help fund the bill. A lesser known fact of tax law changes is that they are supposed to net out to “zero”, meaning that if taxes go down in one place, they’re supposed to go up somewhere else; or at least, that’s the intended theory of funding government projects. Today we’re taking a look at the proposed changes to tax law, that if passed, could involve a government hand reaching deep into your pocket. To be very clear, none of this is in effect yet, but stay tuned.

Peter Thiel: The Empire Strikes Back

Billionaire Peter Thiel made the news earlier this year when it came out that, through the investment in a private startup company using a Roth IRA in the 90s, he’d amassed over $5 Billion dollars in un-taxable and tax-free money. The public was of course, shocked: How can billionaires amass so much wealth, let alone untaxable wealth?! To combat this, the proposed tax changes include a provision to force RMDs out of IRAs that are too large if the owner also has too much income. The conditions are as follows: If a taxpayer filing single has over $400,000 or a taxpayer filing married jointly has household income over $450,000 (not terribly fair), and their IRA accounts (Traditional, Rollover, or Roth) total a value of more than $10 million, then there will be required minimum distributions of: 50% of the value greater than $10 million and lesser than $20 million, and 100% of the value greater than $20 million. This leads to some bizarre gerrymandering in tax returns. For example, a married billionaire could have $1 billion in their Roth IRA but claim $449,999.99 in income for the year and not be affected. But if they claimed a single cent more, they could end up being forced to distribute $985 million dollars. Conversely, for lower affluent taxpayers, by the miracle of compounding math there could be a scenario where someone who has saved a few million to retire on at this point, could (in the future) through a combination of RMDs and compounding interest, find their IRAs over the $10 million dollar limit and be forced by existing RMDs over the tax bracket line. Suffice to say, while the intentions of the law are to stop the ultra-wealthy from accumulating enormous tax-advantaged assets, there are some financial planning problems presented if these numbers don’t adjust for inflation over time.

In the current tax law and under the Employee Retirement Income Security Act (ERISA), taxpayers can contribute up to $19,500 or $26,000 (over age 50) to their 401(k), plus receive matching. They also can make “after tax contributions”, where their contributions don’t receive a deduction for the contribution and aren’t treated as Roth contributions but end up creating a “cost basis” in their traditional pre-tax retirement assets. The law explicitly creates a prohibition on converting after-tax contributions in 401(k)s into Roth contributions. This doesn’t mean the end of IRA to Roth IRA conversions, but it does put a damper on Roth savings for those who in the future wish to create greater retirement savings on the other side of the tax line. Fortunately for those who are in the middle of this process, this would not take effect until December 31st, 2031, so there’s still time! That said, this provision is quite clearly an example of tax policy by outrage.

Not to say all the provisions of the law are aimed at retirement account holders, there’s also some fairly conventional increases to tax brackets. Specifically, the 32% tax bracket for single filers would be reduced from ending at $209,425 to ending at $200,000, and the 35% tax bracket would now start at $200,000 and end at $400,000, a reduction of over $123,000. For the married, the same brackets reduce from $418,850 to $400,000 and $628,300, to $450,000, which is a very significant penalty on married couples. It is noteworthy that this could lead high income couples to revisit filing separately on their taxes, which raises some significant planning considerations for high earners. Don’t get out your small violin yet though, because we also see an additional tax at the highest bracket, raising the highest bracket from 37% to 39.6%, in tandem with an increase to the top capital gains tax bracket from 20% up to 25%, and drops the qualifying thresholds from being in alignment with the top income tax bracket down to $400,000 single or $450,000 married. If you’re thinking to yourself, “Well, that will never be a problem for me”, think long and hard about what has happened to home prices and what could occur if you decide to move or downsize in a decade or two.

Yes the classic expression is to “eat the rich”, but there are plenty of business owners who are far from rich and yet, the tax proposals include several shots across the bow of small business. For starters, S Corporations are the “mini company” version in the tax code for small closely held private businesses with a limited number of owners whose ownership is denominated in stock, rather than a traditional partnership. At present, wages paid to those owners who work in their own companies treats them as a W2 employee, while profits of the company aren’t taxed as wages (i.e. they don’t incur payroll taxes for Social Security and Medicare). The tax law proposes the introduction of a 3.8% S-Corp profit surtax on top of the increases to the tax brackets mentioned earlier; this means that the top marginal tax bracket rate increases from 37% in the current federal tax code to 43.4%. Live in a high income tax state like California, and you could see a couple earning $450,000 together paying 54.7% on their top dollar.

But in total fairness, the actual rich aren’t getting off too easily in all of this. For those whose income is greater than $5 million married or $2.5 million filing single (including those who are married filing separately), there is an additional 3% surtax on their income. Yes, you can cue the small violins now, but it does add up to some significant increases in taxes! However, the place this could come around is on individual taxpayers as well. For those with family trusts, the surtax also applies to any trusts that generate more than $100,000 of income. So for those who are leaving behind a high cash-flowing legacy for their kids or who’ve inherited such a resource, it’s time to schedule a meeting with your attorney and CPA.

Cryptocurrency is Brought into the Fold

An odd trait of Cryptocurrency for many years has been that it has been treated as property and not a portfolio asset in the tax code, meaning that it was not subject to the Wash Sale Rule. This bill makes Cryptocurrency subject to wash sales as of 1/1/2022, giving owners one last chance to conduct some more aggressive tax loss or gain harvesting before the new rules could kick in.

In order to cut down on the Thielesque abuses we mentioned earlier, private offerings and placements are now prohibited in IRAs of all varieties. This in the view of the author is a small loss, given that private investments are often highly illiquid, complex, and high fee for their investors (read: the house always wins). This could have some limitation on entrepreneurial investing through vehicles such as self-directed IRAs, but ultimately this is unlikely to have much effect on the common investor.

Well, first of all, this is not law yet. However, most provisions of the law are set to take effect on the date of introduction (read: 9/13/2021, so it’s already too late). That said, because of significant changes to conversion rules and capital gains rates, if you planned on performing significant conversion work or making major transactions of high-value assets this year, it is absolutely imperative that you consult with your CPA, CFP, and legal professionals to ensure full compliance and that you don’t fall into the proposed tax traps!