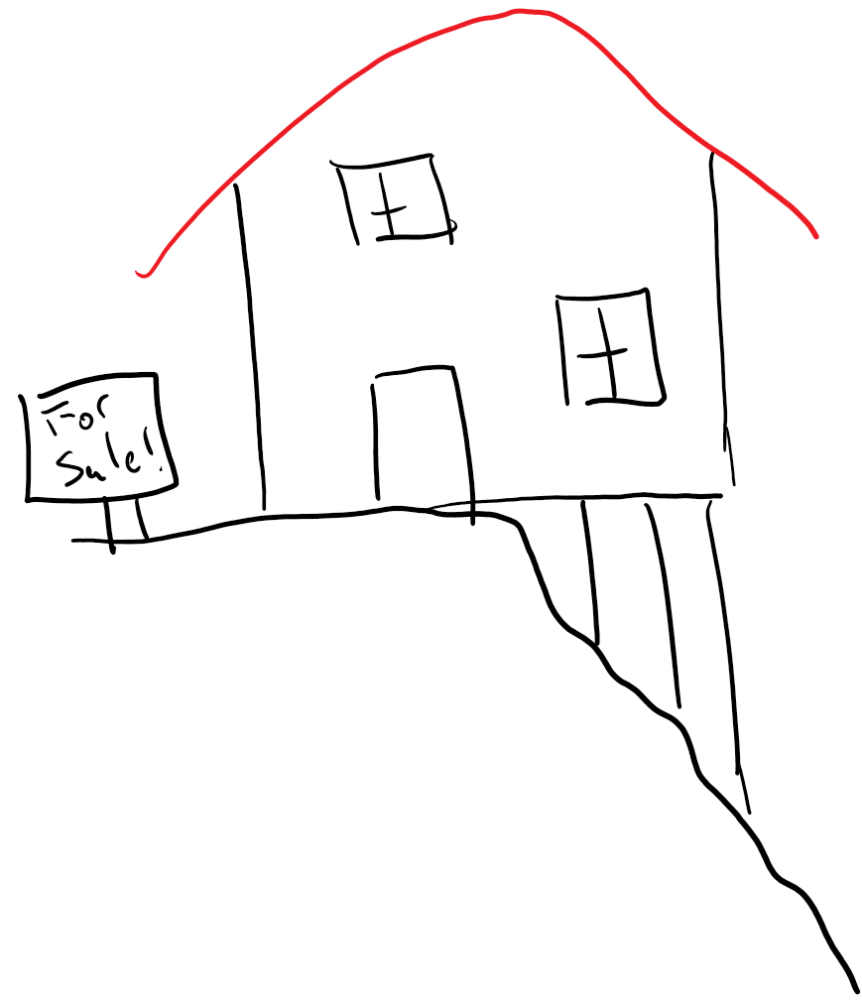 It’s not uncommon to see an advertisement for “guaranteed passive income”; whether it’s the harmonica playing insurance agent, a real estate mogul, an accredited investor Regulation D offering on Facebook, or just your bank touting some FDIC secured CDs, there is no end to the promises of others to give you guaranteed passive income. Yet, as the old adage goes, “there are no free lunches.” Today we’re breaking down the means and methods behind popular “guaranteed incomes” and considerations you should make before committing your capital.

There are few more misunderstood vehicles than a fixed index annuity. Sold with promises of investing your money in the market without taking any of the risks of the market, these products tout a floor of your invested capital and appreciation akin to the S&P500 or other popular indices. On top of that: “No fees!” Yet, these are materially misrepresented value propositions, and I’m sure my smart readers can pick up on a trap when they read one. First, let’s look at the floor: The promise is that the insurance company will never let your money in the contract policy lose money. “If you put in $100,000, it’ll never be worth less than $100,000.” But the balance here is that you have two values being measured by the annuity: First, the contract value. The contract value is the actual value of your policy, the money you invested into it, and what it would be worth if you converted it to cash or moved it elsewhere. This value on day one of a policy is often 10% lower than your invested capital because of surrender charges, which in many cases last close to ten years, and in some cases can last up to twenty. Assuming we get past that point, the contract value is not likely to accumulate very much during the duration of the contract, but we’ll get to why in a moment. The other value is the much more advertised value, which is the “rider value”, typically representing a much more significant theoretical value than the contract value, representing the accumulated promises of the insurance company to pay higher levels of income in the future so long as you keep the contract with the carrier. So back to why the contract value doesn’t accumulate very much: First, you have the cap rate. Fixed indexed annuities will often offer a range of index-based choices, for example, the S&P 500, a Barclays Bond Index, and a Treasury Index. If you pick the S&P 500 option, with the most volatile investment values, it will have a low cap rate such as 4% annually, while the bond index will have a 10% cap because it’s unlikely to ever grow that high. You’ll also often see a participation rate, such as 100% participation, i.e. the S&P goes up 5%, you’ll go up 5%. But the trick here is that it’s based on the S&P 500 Index’s face value, not its total cash flows. While the take-home value of an index might be 10% in a year as a combination of its face value and dividend distributions, if 3% of that 10% was made up of dividend distributions, the insurance contract holder would only see their value increase by 7%, or only up to the cap rate of the policy! And back to the “no fee” claim: While fixed-indexed annuities do not charge explicit fees, they make their money in the margins. The index profits above the cap rate go to the insurance company. The dividends paid by the indexes your policy follows? Go to the insurance company. The participation rate when it’s lower than 100%? Go to the insurance company. The expression goes that “the house always wins”, and that’s certainly true in these products.

Few structured “business ownership” products such as master limited partnerships (MLPs) or limited partnerships survived the changes to the tax codes in the 80s and 90s; while previously touting enormous tax perks, their complexity and cost sank them after the tax advantages evaporated. However, a hang-on remnant of this era is the “Real Estate Investment Trust” or “REIT”. Owning enormous chunks of the commercial and rental real estate in the United States, REITS pool investor money together to build or buy real estate investments such as malls, hotels, office parks, and so on, and in turn to reinvest the capital back into more projects or to yield cash to shareholders. However, REITs come in two flavors: Traded and Non-Traded. Traded REITs act much more like Stocks or ETFs than a structured product, and provide a reasonable level of liquidity for investors to invest in real estate holdings without long-term commitments. On the other side, non-traded REITs often have multi-year or decade-plus holding requirements, and can often lock up investor capital from being redeemed in amounts greater than intended by the REIT managers. A defender of REIT products will point out that by law they have to distribute the majority of their profits to shareholders on an annual basis, but therein is the rub: Profits, not cash flow. REITs can be structured to pay managers and employees working in companies under the REITs to the tunes of high six figures and low seven-figure compensation packages. The REIT can also be managed to reinvest all excess capital to grow the base of investments underlying the REIT while yielding little to no cash flow to owners. Last, because of the enforceable lockups of years or decades on investor capital, the REIT can hold onto significant balances of investor dollars without yielding back to those investors any significant profit unless they hold on for the long term.

Okay, I know you’re wondering: “Did you just say the singer with the long hair is an annuity?” No, that would be “Sia”, and today we’re talking about “Single Premium Immediate Annuities”. Research has found that SPIAs are the most effective version of annuities because they convert a lump sum investment into a lifetime stream of income guaranteed by an insurance company, and at a crediting rate higher than the money invested alone can provide for the long term. How? When all the participants of a like age group together in an insurance company’s SPIA, the insurance company can pay everyone more than their money can sustainably provide because of the pooling of risk. Some pool members will pass away sooner than their own money would have run out, leaving extra money in the pool to provide higher take-home amounts to policyholders. The studies have further shown that spendable income in retirement is a major predictor of retirement satisfaction, and that calculated long-term outcomes are often statistically better than they are in a standalone manner. That said, a SPIA removes superannuation risk (The risk of running out of money before you die) and exchanges it with an often-ignored risk: inflation risk. Most SPIAs pay a fixed rate that never increases with time. But if inflation picks up in a big way, a policy holder’s guaranteed income could be worth little to nothing. In this case, the unknown of timing is everything. SPIA buyers in the 80s have profited enormously if they took inflation-adjusted versions that increased payments annually in return for lower initial payments because at the time, inflation was high and payments would have to increase by significant percentages to be appealing. Conversely, if you bought a SPIA last year, you’ve been left holding a scary bag, as the assumptions of inflation at 2.25% are much lower than the going rate of 5.4% that we’re seeing in the current marketplace. Ultimately, a SPIA can be a valuable tool, but like most strategies, not all money should go in one basket.

Seldom does the life of anyone go by without a family member or friend showing up looking for an investor. This could be to help grow an existing business scale, to get a startup off the ground, or to fund the black sheep cousin’s habit. Regardless of the circumstances of the ask, investing in a business represents an incredibly high risk and high reward option for providing passive income, but one worth exploring. Studies have shown repeatedly that privately held businesses provide the most disproportionate investment return for the level of risk; that is to say, the high failure rate of businesses is somewhat offset by the significant financial reward in limited cases. As a result, the risks of this opportunity are often down to the reliability of those who are managing the business. Do they have experience, does the business model make sense, are there strong contractual guarantees about ownership, repayment terms, what happens in the case of a default, and so on? Conversely, there are some immediate tax advantages to the investment in a small business. Any investor can immediately expect that their capital will be used to grow or finance the business into greater scale, which results in expenditures likely above profit, aka “generating a loss”. Investors can write losses off against their tax returns in the short term up to the limit of what they invested, i.e. if you invest $20,000 and the business loses $40,000, you can only write off the $20,000. The word of caution here, of course, is that deducting the early business losses reduces the basis an owner or investor has in a business and can result in higher taxes later on down the road. Finally, it helps to be realistic: While we all wish we were Jeff Bezos’ parents investing in Amazon in the 90s, it’s more likely that we’re investing in Joey’s motorcycle fashion store, and we should set our expectations realistically.

So, where’s the guaranteed passive income?

Sad to say, there’s no such thing. Ultimately every “passive” investment requires some level of due diligence, and even though the income itself might be guaranteed by the delivering party (i.e. a bank or insurance company), we should be cautious when thinking about other risks such as marketability, liquidity, and inflation. All things accounted for, there are sources of guaranteed passive income out there, but it’s incredibly important to find the right fit for you and to account for which risks are too great for the opportunity.