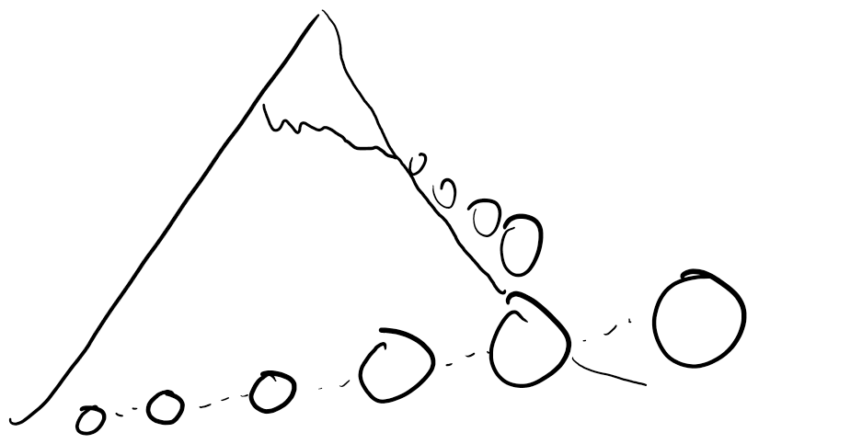 With a national debt of $23.3 trillion dollars, you could say that debt is American as “baseball, mom, and apple pie.” Yet debt is a major source of existential and cultural angst, with multiple studies linking stress and both physical and mental health issues to the levels of debt carried by Americans. In 2015, the Federal Reserve even found that employees who are in significant debt are likely to spend as much as 20% of their working time focused on their financial challenges rather than working. There are many political debates about how to combat the debt levels we’ve accumulated as a society. Fight the cost of higher education, restrictions on predatory loans and credit interest rates, and various proposals for concepts such as universal basic income. Ultimately, most of these are lofty and could be desirable solutions, but they’re not something we can take action on as individuals. Today, we’re taking a look at how to view debt, how to pay off debt, and some particular highlights in the types of debt people accumulate.

Debt is a Tool or an Anchor?

There’s a good case to be made for just about every form of debt. While credit cards charge exorbitant rates, they provide a “no questions asked” source of credit in emergencies, and some people have spent significant time finding ways to leverage interest-free periods and various rewards programs into growth in their assets. However, ultimately, when debt is being used constructively, it relies upon a “net present value” calculation. “Is the accumulation of this debt, the loss of future earnings to payments and interest, worth it in the long haul?” This is best demonstrated by the purchasing of homes. Very few Americans, particularly early in life, have the liquid assets to simply buy a house for cash. While this is more viable in certain parts of the country, in Longmont, CO you’d likely have to show up with $400,000 or $500,000 to avoid taking on debt to buy a home, which is approximately seven and a half to nine times the median annual income for the area. Thus, while the purchase of a home and the subsequent mortgage represents an enormous financial obligation, it still is a great candidate for the example of a “constructive debt”. I’ve written before about how your personal residence is functionally the “best bad investment you can make”, but this is an important consideration in the decision to take on debt. In the case of a home, at current mortgage rates (averaging 3%), you’re purchasing a home at a rate barely greater than inflation. Compounded with the likelihood of appreciation on the value of the land and structure, the money going into a mortgage debt is likely worth the loss of income to future principal and interest payments (not to mention some of the tax advantages that can come with it.) For those who are aggressively pursuing keeping this debt as low as possible, grants and new home buyer programs can offer reduced down payments, and even large national programs like the NACA can offer mortgage rates bordering on 0% for those with the means to pay the points to lower the rate in advance. However, as we move up the spectrum to higher interest rates, we have to be more critical in examining the adoption of debt. While higher education institutions like to tout that a good education is priceless, much of the debt assumed by students in the pursuit of an education is pointless. For example, while a four-year bachelors degree in computer science is valuable, if the student knows what they’d like to specialize in, the credentialing and certification programs for various code languages are likely significantly cheaper than a University education, along with not spending unnecessary tuition on courses such as Biology and Philosophy that ultimately don’t affect their future career prospects or skill requirements. These considerations are compounded when the field of study has lower future income potential and higher education requirements; while certain masters and doctoral programs produce graduates earning significant wages, particularly in business, pre-med, and legal programs, many degrees cost several times more than the earning potential of their graduates. That said, the current federal rates for debt are about where we top off our “good debt” spectrum and begin to descend into bad debt.

The Cost of Bad Debt

If it wasn’t abundantly clear, we’re not fans of high-interest rate debt, but there are good reasons for that. Functionally, you have to understand that the cost of debt is an acceptable cost if that cost is lower than the utilization of financial resources elsewhere exceeds the cost of that debt. So if the debt is 4.5% for a used car, that debt is acceptable, because the cost of walking or riding your bike several miles to work or to transport your children around might outstrip the lost wages and time. Alternatively, the same car bought for 12% because of bad credit is probably worth taking a second look at. The breaking point between debt as a tool and debt as an anchor occurs around 7%. The primary driver for this is the rate of return on earned income that is then deployed in 401(k) plans and other investments. If extra money can be invested, it’s generally arguable that you can assume a rate of return greater than 7% annually over a long term period of time (10+ years) if you utilize low cost and diverse equity investments; there’s a risk that this outcome isn’t guaranteed, but historically it is incredibly unlikely to be the case that such investments would lose significant value over a long time horizon. However, when the debt starts to stretch to those upper single digits and double digits, we now have switched over to a point where it’s more valuable to deploy dollars to pay off the debt than it is to invest. While the investment may have greater long-term potential, the rate of return on paying off the debt faster is greater. The formula for the rate of return on paying off debt faster than its minimum payment schedule is effectively equal to making an investment at the interest rate of the debt for the duration of the debt. So for example, if you had a 10% 10-year personal loan and paid it all off at once in advance, your saved interest would be equivalent to an investment of the same amount for the 10-year duration at a 10% rate of return. Thus, when faced with something like a credit card charging 24.99% interest annually over 15 years on its minimum payment schedule, the rate of return on getting it paid off sooner is enormous. Note that none of this is a good case for “taking on debt and then paying it off for the investment return”, these rates of return are simply a saved opportunity cost (the money you’d have had to pay otherwise).

A popular method of debt paydown espoused by a financial talking head is the “snowball method”, in which you target the smallest debts first and pay them off first, thus freeing up money to pay down other debts. The idea behind this method is not to efficiently pay off debts but to accumulate small wins early and build up wins over time to build confidence in the debt payoff method. While that’s well and good, I’d like to think readers of this program are made of tougher stuff. Thus, the more effective method is the avalanche method. In the avalanche method, you start by paying off the highest interest debts first until you’ve gotten down to a mortgage, student, and low-interest debt on assets like a used car. The return on this method is significant, though it can feel like it takes longer, it will effectively pay off debt both faster and save a debtor significant financial resources over the long haul. The reason we specify that the paydown should halt at the point of student debt and mortgage payments is that both the rates of interest are lower than the likely return on investments, but also that there are specific advantages to student and loan debts. With programs such as PAYE and REPAYE, student loan debtors may not have to pay off the full balance, instead, paying a percentage of income for a fixed time period before the remainder is forgiven. In the case of mortgage debt, as we identified earlier, the interest rate is so low that it is likely less than the value of inflation and appreciation growing underneath the cost of the liability, on top of the tax deductibility of the mortgage interest.

What other tools are there?

A classic choice is debt consolidation, but we have to be clear about what a good use of debt consolidation is: pulling consumer debt such as credit cards and other higher interest rate liabilities into lower rate liabilities such as interest-free periods on credit cards or into refinanced mortgages is fine. However, consolidation is often misapplied. While the strategy to consolidate small high rate debts into a larger pool of low rate debts is good, often this is not done to speed up the paydown of liabilities, but rather to free up cash flow. This can make some sense if the debt is pulled into something low rate like a mortgage at 3% in the current environment since the cost of the debt on the mortgage is nominal compared to inflation and other opportunities. However, when the strategy is utilized to increase spending or simply to defer debt payments into the future, this undermines the value of the strategy. While an interest-free consolidation of debt for a year can help ease the burden of credit card debt, having that same interest pop back into existence in a year doesn’t make a significant difference. Alternatively, if the borrower has decided they’re going to keep their payments up throughout the interest-free period, they can get ahead and make a significant dent in the debt that normally would have continued to accumulate significant interest. For example, throughout the pandemic, interest rates on student loans were frozen and required payments were deferred by law for over a year. While this was necessary relief for many who were put out of work or experiencing financial strain, many of those who remained fully employed throughout the pandemic stopped their payments. They didn’t need the money, so the opportunity to simply keep up the normal payments without having money go to pay interest was wasted. Ultimately, regardless of what tools or strategies someone utilizes to conquer their debt, the most important decision here is to be deliberate in the application of a debt paydown strategy. Simply shuffling the deck on debt doesn’t get someone to financial independence any faster: there has to be a strategy to win.