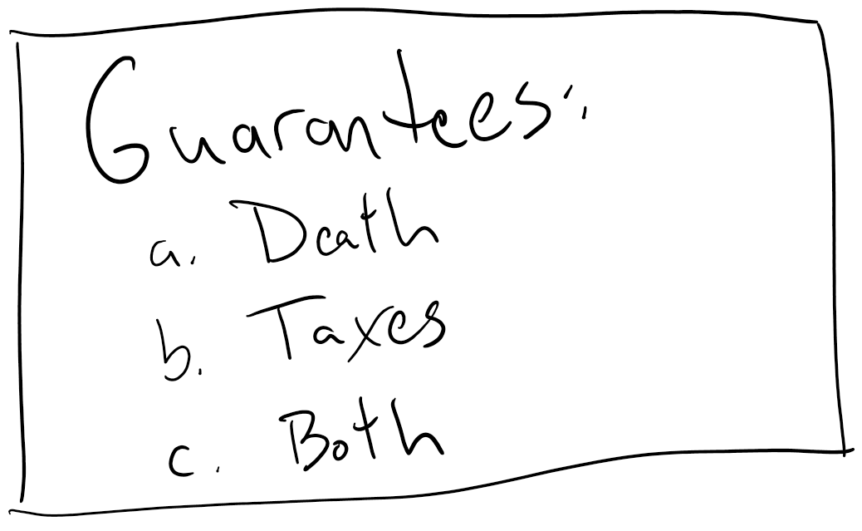 There’s an old saying from Benjamin Franklin: “…nothing is certain but death and taxes.” Charmingly dour as the sentiment is, he’s not wrong about that when it comes to your financial affairs and the handling of your assets when it comes to moving on from this life. As a nation, we’ve experienced a disproportionate amount of loss in the past year and will likely see a decent bit more this year, as well as those more expected passing further into the future. This week we’re taking some time to talk about what happens to your assets when you pass away, and some considerations when handling your financial affairs. Before we do, an appropriate disclaimer: I’m not an attorney or an accountant, this is purely educational, and you should always consult the appropriate professionals when making the important end-of-life decisions regarding your assets and estate.

While many politicians bemoan the “death tax”, the taxation of estates in the United States is actually quite generous. Under federal law, a single individual in 2021 receives an $11.7 million exemption from their estate. So if you own a house worth a million dollars, have $700,000 in personal possessions, and another $10 million in the bank, you won’t owe uncle sam a cent, at least not at the federal level. The place where things get a bit less generous is at the state level, with states like Hawaii and Washington having estate taxes up to the mid-teens on top of federal taxes, and often with much lower estate exemptions. However, that all said, the average American doesn’t have to worry about Uncle Sam coming along and taxing their assets as they pass to their heirs. In fact, death can even be a tax positive event, as non-qualified assets such as your home, vehicles, and non-retirement accounts receive a “step-up” in basis, eliminating the taxation of capital gains on the assets as they pass onto your children or other beneficiaries. However, there are different ways of passing on assets to your children, so let’s take a look.

Most people keep their assets in their name. “John Smith” on the bank account, or “John and Jane Smith” for couples. In the case of retirement assets, accounts are always named for the benefit of the individual: “Traditional IRA For the Benefit of John Smith”; there is no circumstance in which retirement accounts are comingled with multiple owners because they are required to be tied to an individual social security number (or trust at the beneficiary level) and are tied to the lifetimes or an artificially established lifetime of their owner (in the case of a trust owner). In other cases, joint ownership can be beneficial to the living. Many states utilize the “Joint Tenants With Rights of Survivorship” designation (JTWROS), and some offer the “Tenants in Common” designation (TIC) for joint accounts and property. The taxation and step-up of basis, however, is slightly different between these two. With JTWROS, the owners share an undivided interest in the account’s assets. Thus, if a husband and wife own an account, and one of them passes away, only half of the account’s basis will receive a step up, which benefits the surviving spouse. In the case of a TIC account, the owners have a divided “share” of the account, which can be equal or differentiated based on the amount of money contributed by each owner. In those cases, only the divided interest of the deceased receives a step-up in basis. Finally, a word of financial fraud protection here: Many Americans as they transition into senior-hood add their children onto their bank or investment accounts as co-owners. This is a disastrous idea for a number of reasons: first, the ownership is undivided, meaning that the co-owner can theoretically take all of the money out of the account legally, which is a common route for the financial exploitation of seniors. Second, because the ownership is undivided, if the co-owner of the account is sued successfully, the parent’s assets can be taken as part of the settlement or judgment against the child. Third, because the account is co-owned, this can create problems with the step-up on the basis upon the parent’s passing, as the account is either JTWROS or TIC and functionally will not receive a full step up. It is highly recommended that parents wishing their children have access to assist them with their finances consult with an estate attorney, who likely will recommend a durable limited financial power of attorney, which would give the children appropriate authority to assist when needed, keeps the ownership of the assets in their parent’s names, and requires a fiduciary standard of care when handling their parents’ assets.

Pay on Death & Transfer on Death

A common solution for ensuring assets pass onto our heirs is to establish a pay on death (POD) or transfer on death (TOD) designation for bank and investment accounts. In the case of a POD, upon receipt of evidence of the death of the owner of an account, the bank will write checks to the designated beneficiaries on the POD account and close out the owner’s account once those checks clear. This happens by “process of law” and avoids issues with probate, wills, and trust administration. A similar process occurs with TOD designations, except that the investments are not immediately sold and the proceeds are not sent, but instead transfer “in-kind” to the beneficiaries in order to keep the investments as the deceased owner intended. Once the assets are received, the heirs can keep the investments or sell them. There is likely to be some capital gains at this point since it has probably been weeks or months since the original owner’s deaths, but the cost basis on this transaction will be equal to the value of the assets as of the death of the owner, so the possible gains or losses are likely to be smaller than if the cost basis from years or decades ago still applied.

Will & Testament vs. Trust

In advice, I don’t have much to say on this subject because it’s so circumstantial specific, but simply wish to clarify some common points of confusion I hear about wills versus trusts and the like. The most important thing to know is that “which is better for you” is highly circumstantial to your wishes for your assets when you pass away, and the Testate laws of the state you live in. Some states are considered “easy probate states” while others are considered “tough probate states”; as a result, some states have wills and testaments as the more popular solution, and others have trusts. A common issue I see for owners of trusts specifically is that they fail to title assets in the name of the trust (thus creating a probate issue) and/or fail to utilize the trust consistently, thus producing the same problem. However, there is no “one size fits all” solution here, but most importantly, by titling your assets correctly and providing beneficiary designations, POD, or TOD orders on your financial assets, you can bypass many complications or issues with both probate and trust administration processes. This is an area where I highly encourage the engagement of a competent and experienced estate attorney, and I strongly suggest not going the DIY route or “bargain” option such as online platforms or forms; after all, if you get your estate instructions wrong while you’re alive, you won’t be around to clarify your wishes when you’re gone.

One More Time for the Good of the Order: Consult with an Estate Attorney and/or CPA when dealing with your estate planning. An ounce of prevention is a pound of cure.