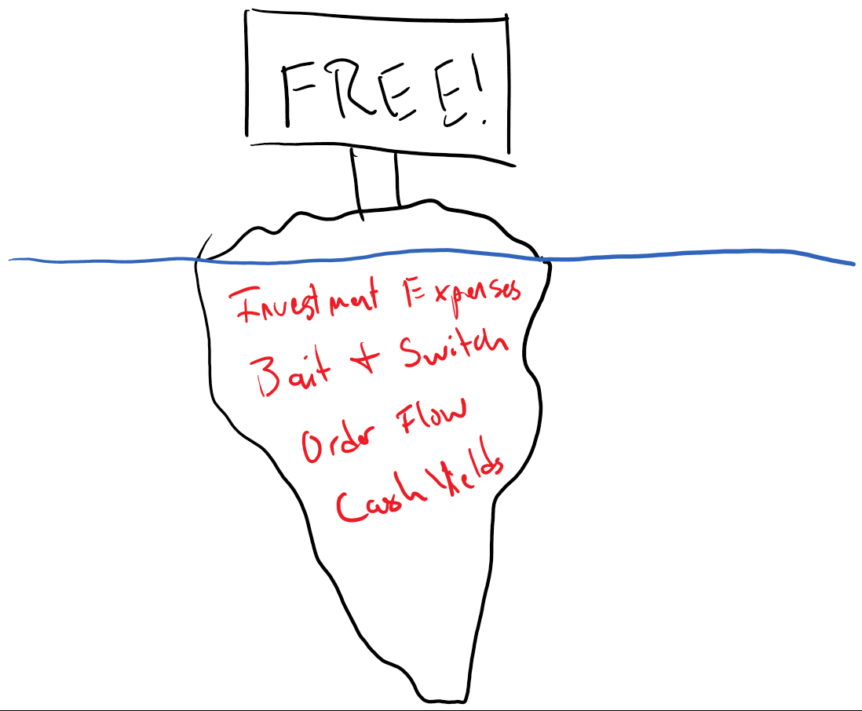 “If you’re not paying for it, you’re the product.” -Unattributed

This expression has come up in popularity over the past several years as the public has become more aware of the business model of popular social media platforms such as Facebook and Twitter. As the public learns that these companies are effectively large advertising platforms designed to target them directly, it has become more protective of its personal information, providing less profile information, utilizing VPNs to hide their personal traffic, and otherwise applying a healthier dose of skepticism to the platforms where we live a great deal of our virtual lives. However, this same healthy skepticism often goes missing where personal finance platforms are considered. This week, we take a look at a few case studies on how “free” financial platforms effectively monetize our use of the platform.

Colorado PERA (Public Employees Retirement Association) operates two major retirement platforms for city workers, school teachers, and a variety of other employees who work in some part of the public sector. The traditional PERA plan is a pension platform that manages over $52.1 billion dollars on behalf of public employees and is funded by non-elective forced contributions by employees depending on their job role. These contributions act as a replacement for contributions that would otherwise go into social security and are both contributed by employees and their employers. However, despite the enormous economies of scale enjoyed by PERA, PERA operates at a fairly high cost, with an average expense of 31.5 basis points (.315% of the assets, or $164 million a year.) For context, a pension portfolio or 401(k) of just $50 million managed by MY Wealth Planners would cost 16 basis points, and likely less with 100x the scale of assets and efficiencies that would be created by such economies of scale. Yet, despite the significant invisible costs borne by participants, there are two additional swipes taken at their life savings, both in the cost of their self-directed plan and the cost of trying to get out of it. Participants in the self-directed plan (457 or 401(k)) are required to pay monthly hard dollar expenses of $1, plus an extra 3 basis points (.03%) of their assets for the plan, plus an additional fund management cost with an average target-date cost of 10 basis points and a highest cost of 30 basis points. If a participant wants to self-direct to find lower-cost options, they’re then slapped with an additional $50 annual fee for daring to use options outside of the set catalog. Then comes the pitch: PERA outsources its defined contribution (457 and 401(k)) functions to Voya Financial, an insurance-based broker-dealer out of Des Moines, IA. When a participant attempts to leave the plan (retiring, rolling their money over to a new employer or an IRA, etc.) Voya will pointedly ask the participant if they have a financial advisor. If the participant answers honestly and says “no”, rather than fulfilling their request to transfer funds elsewhere, Voya will direct the participant to a call center where salesmen will attempt to sell the participant an investment or insurance product as opposed to fulfilling their original transfer request; And the kicker? These alternative options cost easily three to six times as much as their original PERA plan!

The majority of dental professionals are members of the American Dental Association (ADA) and enjoy many perks of membership, such as continuing education, conference discounts, professional networking, vendor discounts, and most excitingly, a bundled association 401(k) plan. The association 401(k) is the pride of many dental practitioners, as it offers what appears to be a low-cost retirement plan to their employees at a nominal cost of $3 per quarter to the owners and employees of firms that participate. However, not all things are as they appear. While a 401(k) will typically cost a startup plan a minimum of $550 a year to administer and report, the ADA plan charges participants the nominal $3 a quarter. How are such incredible savings possible? High investment expenses. Unbeknownst to most members of the public, orthodontists and dentists make some of the best money in the country, earning an average of $230,830 and $159,200 a year respectively in 2019. Because of this, they are quite likely to maximize their contributions to the plan, totaling $19,500 or $26,000 depending on their age, plus matching and profit-sharing that can bring their annual contributions up to $57,000 per year. However, the investment expenses for the ADA plan are significantly higher than industry averages. While some low-cost options are available from Vanguard, the platform provider for the 401(k) plan, AXA Equitable, has added on a 180% increase in fund expenses for the two low-cost options, while the other plan options average .73% per year. As a result, providers sans any investment returns by the end of their first year might be paying $416 for each year they participate, totaling over $22,880 in just ten years (significantly more than the $120 they thought they were paying!)

Robinhood is touted as a free investing app, offering brokerage services for the buying and selling of investments to the public in a well-designed user app. While the trading functions are limited compared to more robust options advanced investors might pay for, Robinhood boasts over 13 million users in the United States. However, while Robinhood states that there are no costs to using their platform, that’s not entirely true. Robinhood derives revenue from two major sources: interest on deposits and the sale of order flow. Interest on deposits is a common business model for banks and other financial institutions; when users hold cash positions, their cash is lumped together with all other user’s cash and used to finance lending activities, such as margin trading. This cost is mostly controllable by any user by simply keeping little to no cash available in their account. However, the second line of revenue, selling order flow, cannot be controlled. When investors buy or sell investments, they don’t actually buy or sell their individual shares to other individual investors. Rather, their orders are lumped together into large blocks. These blocks are then purchased by a market maker in the particular security (a type of stock, exchange-traded fund, etc.) who buys or sells the shares with a specific markup or markdown from the market price. This mark-up is then passed through to the investor in the form of a slightly higher cost of acquisition or slightly lower profit on the sale; the cost is typically a few cents per hundred shares, but these can seriously add up. In the most recent evaluation of expenses, the average lot of 100 shares bought or sold on Robinhood cost their users 24 cents, compared to 15 cents from order flow at TD Ameritrade and 16 cents at ETrade. Doesn’t seem like much, but it added up to $69,116,307 for Robinhood in the 2nd quarter of 2020, or likely over a quarter of a billion dollars of invisible costs for their customers by the end of 2020.

Getting What You Pay For

Ultimately, this all comes back to the fact that nothing is really free. Whether it’s 2-day shipping or the cost of your investment portfolio, all platforms and services must bring in revenue in order to operate. Whenever a provider or platform makes the argument that they’re offering something for free or at a cost that seems unbelievably low, you have to look under the hood to find the source of the costs, and they might be much greater than they appear!