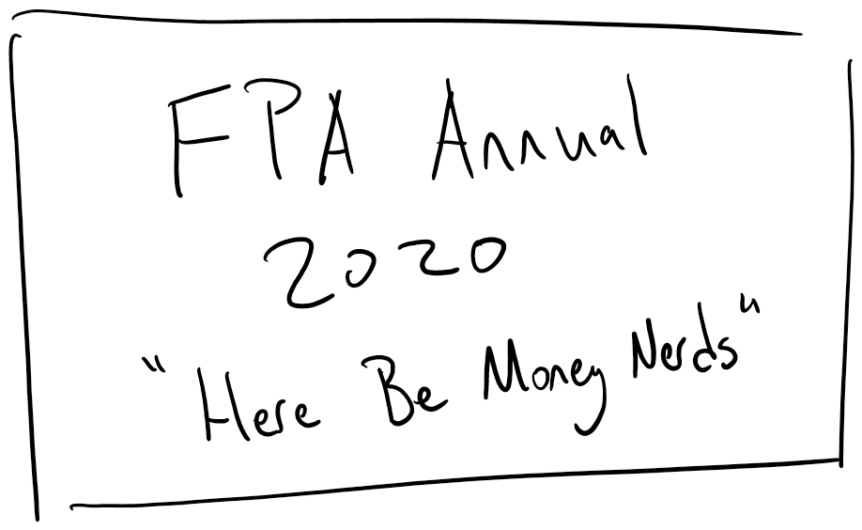 The Financial Planning Association’s Annual Conference is a tradition stretching back decades, bringing together academics, financial planning leaders, industry experts, students, and practitioners to share the latest research, best practices, and latest thought on how the profession of financial planning can improve the lives of everyday people. This piece is going to be a summary of the content I learned from during the conference, so if you’re interested in a “behind the scenes peek,” read on!

This year, the stock market has exhibited some strange behavior (go figure!) this year with COVID-19 driving the market down and then driven back up, despite the economy struggling and unemployment still on the rise. An example of an out of whack indicator was the oil price this year, which dipped from $60/bbl to negative figures in April simply because of the crash in demand for oil as we all went to shelter in place. Despite that, it has largely recovered to a healthier supply-demand ratio. It is a key takeaway that government lockdowns are not the drive for the economic downturn: It’s that the population is largely still afraid to leave their homes as they used to. This is evidenced by Denmark and Sweden, which have very similar populations and economies. Still, while Denmark had strong shutdowns and Sweden did not, their economies have both shrunk 8% over the prior quarter. It is our individual behavior driving the economic environment, not government policy. An interesting and unintended outcome of the current downturn compared to the prior downturn is that we see an enormous amount of entrepreneurship spring out of the current unemployment rate. This is largely possible because real estate has slowed as a sector. Still, we haven’t seen a downturn in home values, so real estate equity (HELOCs, refinances, etc.) have been used to fund a business startup to replace lost job income, which wasn’t possible with the last recession being driven by a housing crisis. That said, there are 32 million mortgages that are distressed at this time (90 days delinquent in their payments.) At present, it’s estimated that 80,000 small businesses shut down permanently between March and July (including 12,000 restaurants), and this is likely going to permanently change the business model for commercial real estate, including protracted lower commercial rents. Ultimately, recovery is going to be protracted but uneven across the country, as different sectors and regions experience a redistribution of economic growth. We will likely see significant relocation pressure from the high cost of living urban regions to urban regions with a lower cost of living (NYC, Boston, San Francisco, et al. moving to areas like Nashville, Grand Rapids, and Atlanta.)

Rebuilding our Future: Financial Wellness for All

A study of 10,000 adults in 2016 on personal financial wellness renewed annually has found some interesting findings in how people’s financial wellness has changed over time. In January of 2020, 55% of Caucasian participants were rated as financially literate (answering at least 75% of questions correctly), while only 38% of African Americans were achieving the same rating, while more than 73% were scoring lower than 50%. These findings were consistent across all areas of financial literacy, with African Americans scoring best on the subject of borrowing (47% pass rate) and worst at insuring (32% pass rate), compared to Caucasians who scored best in borrowing (67% pass rate) and worst in comprehending risk (38%). These findings are interesting less because of the observed racial financial literacy disparity (which is large and needs reinforcement to improve outcomes) but because the concepts of risk measurement and risk management are uniformly the worst understood both in the United States and across countries. However, most disappointingly, only 41% of Caucasian households have planned for retirement, and just 26% of African Americans have done the same. Naturally, the takeaway of the research is that households with higher financial literacy experience greater financial freedom, resilience, and preparation for the future, but the rates for literacy are painfully low, and until financial literacy increases in the general population, many issues of financial inequity will likely continue.

This was actually a split of academic research between multiple research projects. The first study got way into the technical analysis and statistical weeds, but there are two succinct and important takeaways from it: First, that increased risk tolerance is strongly correlated to the ability to predict outcomes of financial volatility as measured by the S&P500 than those who have lower financial risk tolerance. Second, that deep machine learning is more effective at predicting than human-driven regression-based analysis (which tends to mirror S&P500 performance but lags it by a period of days or weeks). In short: If you’re more risk-tolerant, you’re more likely to be accurate about where the market is going, but robots are better at predicting it than you are.

The second study attempted to evaluate the comparison and contrasts between Socially Responsible Investing funds (SRI) and Faith-Based Investing (FBI), specifically how they have similar emphasis in certain areas, but how they frequently use screens of exclusion (i.e., eliminating undesirable investments) rather than screens of inclusion (selecting firms that perform best related to desired goals.) Regardless, in each case, they found that SRI firms do not outperform FBI firms and vice versa; while beliefs are a powerful motivator for some in their investment styles, there is no significant correlation (as measured by Alpha, 3-Factor Model, and others) identified with performance.

The third study attempted to identify the need (or lack thereof) for a financial advisor to identify and measure client’s financial literacy as part of their data discovery process, which assists in identifying whether clients need significant assistance in portfolio development or if they are more or less likely to utilize portfolio diversification to mitigate risk. The research here was largely inconclusive, but did find a slightly positive relationship with those who sought financial advisor advice in the development of their portfolio and whether they would have diversified the portfolio or not. The effect was pronounced if the participant had a higher subjective perception of their financial knowledge than their objectively measured knowledge. Succinctly, people who think they know more than they do could really use some professional help.

Fourth, one of the toughest variables in financial planning is finding an accurate “proxy” for complexity. While many planners use net worth or liquid asset balance to estimate the amount of work and complexity required in a household’s financial composition, these can easily be skewed by large singular assets or can simultaneously be made up of an enormous amount of small assets which increase the complexity significantly. This study attempted to use the proxy of “number of questions” as a metric for complexity and found an expected correlation between the binary of “Does X apply to you?” and answers of Yes, leading to more financial variables and thus being positively correlated to complexity.

2020 is obviously a year of significant volatility and change both in the economy and in our households. However, timeless truths, such as the importance and effect of financial literacy, managing risk, and keeping a long term view of financial behavior, are critical to finding personal financial success.