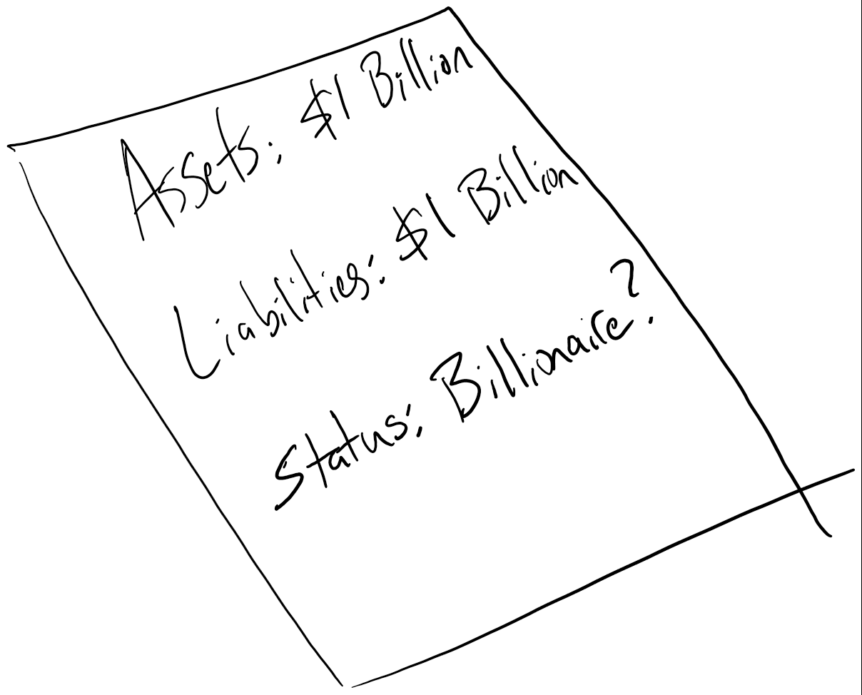 Understanding that two weeks ago I wrote about the behavioral financial biases that lead to someone with political beliefs having their perception of money and the economy skewed by their politics, I’m now probably going to stick my foot in deeper water by talking about a recent political issue: the president’s taxes. In the interest of trying to keep as far away from politics as possible, I’m going to summarize the mechanisms by which an individual can both have enormous affluence and also no taxable income. Again, I’m going to try to keep this as far away from politics as I can, so please read this as simply explaining some of the advanced tax rules that allow this to happen, and how anyone can theoretically apply the same strategies used to get a self-proclaimed billionaire to negative levels of income.

Most Americans work for an hourly wage or a salary on a W2 basis. This is the simple act of generating earned income, which is taxed at standard federal income tax rates and state income tax rates, in addition to being subject to payroll tax (social security and medicare) which the employee pays half of and their employer pays the other half. In the event someone is a contractor or self-employed, the same taxes apply but they pay all of the income tax rather than half of it. Then there are businesses, which can be sole proprietorships, partnerships, LLCs, S-Corps, and C-Corps (among other miscellaneous state-by-state special formations). These entities either have their own income and pay a corporate tax rate or pass through all profits to the owners and onto their personal tax return. For example, if there are two businesses, one being an LLC and one being an S-Corp, and each pays the owners $100,000, if the S-Corp owner takes half of that income in profits rather than as an employee, their payroll tax obligation will be $7,650 less than the LLC owner, because profits are not subject to a payroll tax, but income distributions to an LLC are. These would be “active” businesses. Notably, in an active business, it is treated much like an earned income, and if there are losses instead of profits in the business, those losses can be used to offset positive income in other areas. Then there are passive businesses, which are often things like real estate investments or minority ownership in other businesses. In these cases, the same tax rules apply as for active business owners, but the passive gains and losses can only offset each other, not active income. Finally, you have investment income, which is specific to securities transactions and the like, and much like passive income, they can only offset portfolio gains with portfolio losses (though there is a $3,000 annual passthrough that can be claimed against earned income).

All of this to say, the largest driver of a business owner’s ability to reduce taxable income, is simply to spend or even overspend money. For example, if a business owner has $100,000 in revenue and takes out a $20,000 loan, they can have $120,000 to spend, spend $110,000, therefore have no taxable income, and still have $10,000 on hand (albeit also still having a $20,000 liability). This set of rules around income tax applies at all times, and importantly, is measured periodically in quarterly and annual amounts. In the interim period between quarterly and annual reporting, a business can have profits and even significant ones. However, if the business can functionally get its net profits down to zero at the time of reporting, that “profit float” in-between the reporting periods is more or less irrelevant. We only measure income for tax purposes on exact dates, and that float can both be a powerful tool and also enormous in size (totaling millions or even billions of dollars in some cases). This is similar to the case of large companies such as Amazon which famously pay little-to-no income tax because they have such significant cash generation and float that they can meet all of their financial obligations while keeping their net income effectively at zero dollars and avoiding corporate income tax in doing so.

So why doesn’t everyone do it?

This is the part that’s trickier. Under the internal revenue code, the IRS treats a business enterprise that operates at a loss any three of five year rolling period as a business that is not operating to generate a profit. As such, the likelihood that the business is audited is increased enormously and a failure to make a profit will be heavily scrutinized. That said, businesses that are obviously trying and simply not quite making a profit are not likely to be subject to a penalty (i.e., the bakery that’s losing $100 a month at present but has improved from losing $500 a month previously), but a business that shows little-to-no revenue and excessive losses with no trend toward profitability is likely to be treated as fraudulent and can result in enormous taxes, penalties, and a recommendation to the department of justice for criminal investigation. In short, the risk is usually not worth the potential reward. So while many businesses game their profit float to reduce or eliminate income tax, there is usually enough business activity to warrant the elimination, and the IRS is not in the business of telling businesses that they’re not allowed to deploy their revenues back into the business as they see fit.

So how can someone both be wealthy and have no income at the same time?

Well, simply put: They’re not actually wealthy, at least not in the technical sense. They might have billions in assets and have billions in liabilities, making their net worth more or less equal to yours despite the enormous inflows and outflows. The place where this is abusable and our tax system is flawed, comes from the fact that because we only periodically measure income for taxation and we give enormous leeway to businesses to define reasonable expenditures. An individual can live a life of extreme privilege while simultaneously being poor on paper. For example, take the owners of a prestigious law firm. While the firm might generate millions in revenue a year, they might also spend the majority of that money on business real estate, plush offices, catering for their staff, first-class travel for business reasons, travel to resorts for conferences, eat expensive meals as a business expense, purchase or lease company cars, and so on, to that point that while the day-to-day life of the owners might be high quality, they may have little-to-no income to show for it. While this is certainly ripe for an IRS audit, the auditing rate for the IRS has sat around 1% for years and has steadily declined over time, with a statutory mandate that they cannot target higher income or higher-risk individuals for audit any more frequently than average joes without cause.

We have a flawed tax system. That’s all there is to it, and unfortunately, the political will isn’t likely to arrive any time soon to provide a strong solution for this issue. However, whether you find it morally questionable that some people game the system, I’ll close with some precedential food for thought. In 1947, the case Commissioner v. Newman 159 F.2d 848, 851 (2d Cir. 1947) Dissenting Opinion brought the seminal position in our system of government regarding the payment of taxes or reducing your tax obligation in a dissenting opinion by Judge Learned Hand (what a name!): “Over and over again courts have said that there is nothing sinister in so arranging one’s affairs to keep taxes as low as possible. Everybody does so, rich or poor; and all do right, for nobody owes any public duty to pay more than the law demands: taxes are enforced extractions, not voluntary contributions. To demand more in the name of morals is mere cant.”