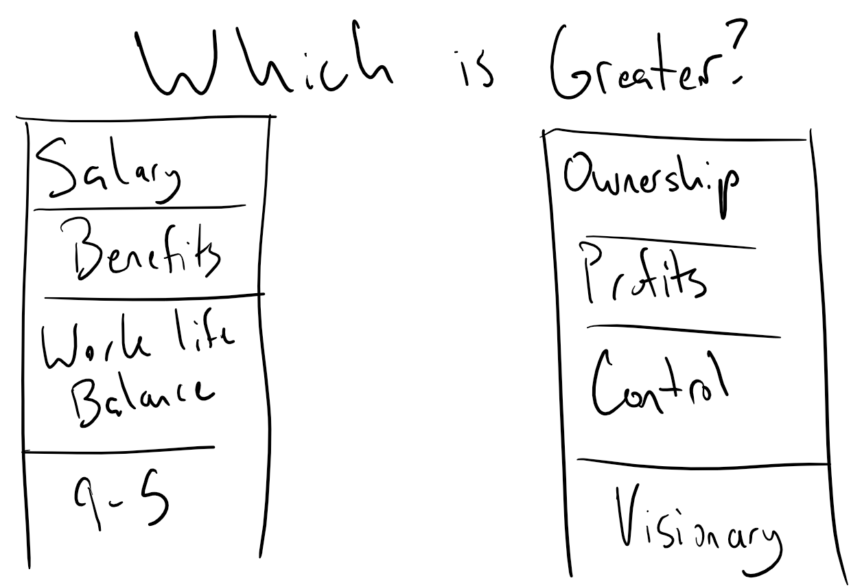 Yesterday a well-known financial planner who is the employee of a larger firm asked this question on Twitter: “Business owners – what were the most helpful resources or learning you’ve had regarding being an owner vs employee? What advice would you give others?” This a common conversation and question that financial planners face with both clients and the general public. “Would I/could I/should I strike out on my own?” Now, I own my own business but to be perfectly honest, I’m always amazed at the tenacity of people who start their own businesses. Particularly those with no business background. Having a Masters of Business Administration with a concentration in finance, I functionally went and got a graduate degree in how to run a business with an eye for making it profitable. By the end of grad school, I still couldn’t have told you exactly how people start and keep businesses off the ground. The idea that someone goes to plumbing or electrician school, gets a wrap done on a van, and just starts going to people’s homes and businesses to ply their trade, and somehow does so successfully enough to eventually hire employees, buy a building, and expand their business just baffles me. Yet it happens every single day.

The financial planning conversation around starting a business is often less about the practical steps (registering with the state, getting an EIN, setting up a business bank account, and so on) and more often on the “why” question. Fundamentally there are three major reasons someone starts a business:

Regardless of the motivation, these all have very different fundamental balances of risk and reward. Consider that the majority of businesses that are started won’t make it more than five years, right out of the gate the “median” business is going to be a failure, and one that carries with it no limit to the amount of stress, financial burden, and pressure put on relationships with spouses, family, or friends. All this to say that the “average” business is going to be a success. While the majority of businesses fail, those that succeed aggregate the accumulated value of the economy, and therefore opens the door to even greater rewards. But given worse odds than coinflip, why do people start millions of businesses every year? In spite of coinflip odds, it’s often because people don’t know the odds are even worse than the term “coinflip” would suggest. It’s not simply a “succeed or fail” question, it is an incredible imbalance of blood, sweat, and tears for the possibility of being a business owner that succeeds.

Answering the financial planner’s question above, I made two remarks:

Are you willing to:
-Put your financial and career security in someone else’s hands
-Risk being the scapegoat
-Be given ultimatums that about your career/personal life
-Be satisfied by the outcomes others ultimately determine for you

If so, being an employee might be worth it.

And those are the hard truth of things. When I was starting my practice, I asked Evan Doll, the founding developer of the Flipboard app (which was valued in the hundreds of millions and came as software pre-loaded on my last two phones) why he made a decision to leave a director position at Apple to start the company. “Because having a salary or a job is no safer than starting a business. You have the illusion that you’re safe because a paycheck shows up every week, but your job is just as at risk as the business you work for, and that’s true of starting a business.” Curiously, Evan went back to Apple in a director position a few months later in pursuit of being more in the cutting edge of development (there was an analogy about being a commando behind enemy lines). All that example and story to say that there isn’t an inherently right or wrong answer. At the end of the day, the decisions we make about our lives and whether we start businesses or pursue a career track are ultimately done in the hope that we get closer to what we want to achieve in life. The risk we take daily with those decisions can have financial, personal, or other repercussions. It is the reward that we pay far more attention to.