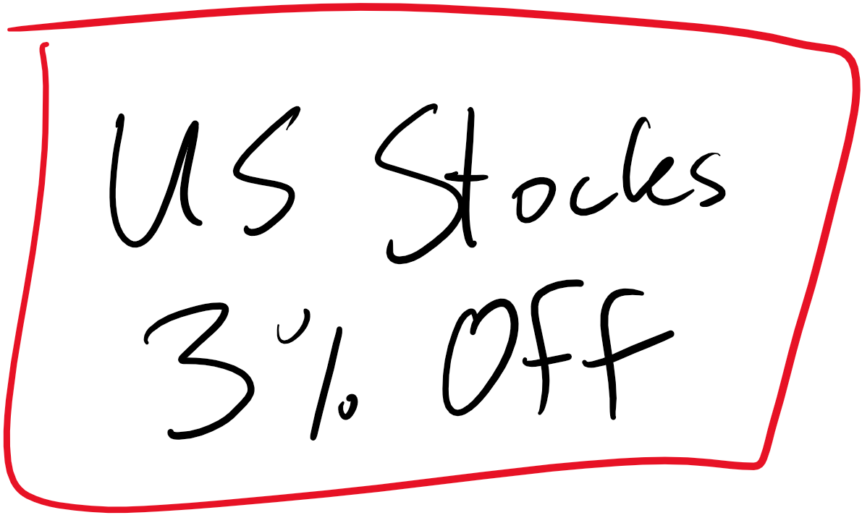 Good news! The market is on sale. Why do I view it so optimistically when the average news report makes it sound like the world is ending? Well, a bit of context is required.

My first year as a financial planner was an interesting one. Within a year we had Chinese market volatility, the first big drop in the preceding four years, and Brexit all occur. A common question friends and acquaintances would ask was “so what do you think about this market?” or some variation about my thoughts regarding what was going on in the marketplace. Being a new financial planner, I didn’t have many original thoughts. Like most people interested in investments, I scanned the news the same as everyone else, read several market analyses daily, and ran myself in circles trying to come up with a thesis to apply to what felt like random events. It was doubly important to me at the time, since the majority of my personal income was coming from the generous and trusting clients who had made big bets on me early in the career, placing their life savings out there for me to manage. Like anyone else, my blood ran cold when the market slipped, knowing that not only did I face the prospect of telling a client that their account value had dropped but that my limited income was going to do the same.

It took a remarkably benign conversation for me to get over my feelings about the market. The market turned around on February 15th of my first year from a recent ten percent slide. Unbeknownst to me,  I was about to invest one of my more investment active client’s money into the market on that particular day. Like magic, the value of that account grew by double digits, more than double that over the “year to date” performance of the rest of the market. Solely out of blind luck, by having put money in on what would be the lowest day of the year. Upon reviewing the account with the client at the end of the year, this client was thrilled and excited to see what great investment we would make next. Yet throughout the entire conversation, I found myself being defensive of the fact that it was luck, not skill. I didn’t want to take credit for something I bore no real responsibility for and hadn’t done intentionally. “We were lucky that the market is on sale, or rather that it was.” Was the point I finished that conversation on.

Since then, I’ve been fairly clear with most clients about market volatility. I make the point with every new client to point out that we could invest whatever sum of money they’d like, and that I have no idea whether it’s going to go up or down tomorrow. I insist on pointing out that there’s every chance that they’ll have ten or twenty percent less money in the account than they started with in a month. From this, I’m fortunate enough that my clients “get the markets” as well as I can ask them to. It’s out of their control, it’s out of my control, in fact it’s out of everyone’s control. That doesn’t give us more confidence or bring us any comfort, but most importantly, we just have to let the marketplace do what it’s going to do and plan accordingly to weather the storms.

A useful tool I’ve come in to explain my perspective on “good” market activity and “bad” market activity is to point out the timing of a long term strategy. If someone is young and therefore more aggressive with their investments, they should also by proxy be saving. If the market goes up, that’s well and good, but that means they’re buying investments more expensively than they could have been if they’d invested sooner. Conversely, if the market is going down, while they might be upset to find that their account balance has declined, their new dollars are buying investments on sale. For those investors who are conservative? Not to worry, the same rules apply but in a different way. While the market going up increases the retiree’s life savings and gives them a sense of security, the market will certainly go down. But, rather than having invested entirely in equities, most retirees or those close to retirement will have a large amount if not the majority of their money in fixed income investments such as treasuries. As “the market” (which is usually measured by equity based indexes such as the S&P500 and DOW) goes down, which occurs when people sell out of equities at scale, they are usually moving that money over to fixed income instruments or cash equivalents, all of which increases the value of those investments. The wise conservative investor then converts the newly increased value of their fixed income investments to buy the equities that have gone on sale, and then waits out the storm until the equities recover. Again, all of this requires patience, but studies by Vanguard, Russell, Blackrock, and others have found that the “value” of keeping to a systematic and disciplined approach is anywhere from 3%-4.1%  a year; not in additional investment returns, but in captured investment value, whereas those who do not have such an approach often lose out on what they could have had if they simply held fast.

This basic principle and philosophy applies at all times. While I’m too polite to say so, when I hear someone talk about how they or a family member “lost all their money in the market” in 2008 or 2001, I’m given to a slight internal sigh, because that means one of a few things: They were either aggressive when they should have been conservative, or they over concentrated in “the hot stock”, or when the markets went down they panicked and sold at a loss. All of which are easily preventable events, if only people took the time. But therein is the deepest problem: for most people, their 401(k) or retirement savings, though often representative of their life savings or the bulk of their net worth, is a thing they don’t pay attention to until something loud and scary enough on the news prompts them to take a look. If only when they did so, they did so not out of panic, but out of interest in seeing that the market is on sale, they would find themselves enjoying news such as the thousand-point drop of the DOW yesterday.